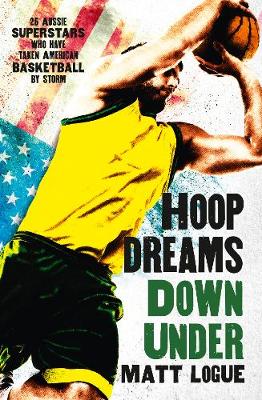 Hoop Dreams Down Under

Description - Hoop Dreams Down Under by Matt Logue

Ever since Luc Longley lit up the court as the first Australian to play in the NBA in 1991, Australians have made an indelible impact on the world's best basketball competition. Longley's journey from Perth to the NBA, alongside Michael Jordan at the Chicago Bulls, paved the way for a generation of players to follow in his footsteps.

Hoop Dreams Down Under documents the behind-the-scenes stories of twenty Australian men and five women who have played on basketball's greatest stage. From surprise success stories like Matthew Dellavedova to No. 1 Draft picks like Ben Simmons and Andrew Bogut, and indisputable champions like Lauren Jackson, these are compelling success stories of Down Under talent that has made it to the top.

Hoop Dreams Down Under is a must-read for all passionate basketball fans, or anyone with an interest in the power of sport to thrill, inspire and reward.

'Matt Logue's Hoops Dreams Down Under is a fun read, packed with all kinds of things I didn't know, including the scope of the Aussie presence in the NBA - way more than a footprint. It's a movement, and he posts it up with an array of well-told stories' Roland Lazenby, sports writer

'If you haven't bought one yet, go and get one. A great read about Aussie basketball player pathways' - legendary WNBA player turned Phoenix and Australian Opals coach Sandy Brondello

Book Reviews - Hoop Dreams Down Under by Matt Logue

» Have you read this book? We'd like to know what you think about it - write a review about Hoop Dreams Down Under book by Matt Logue and you'll earn 50c in Boomerang Bucks loyalty dollars (you must be a Boomerang Books Account Holder - it's free to sign up and there are great benefits!)


A Preview for this title is currently not available.
More Books By Matt Logue
View All