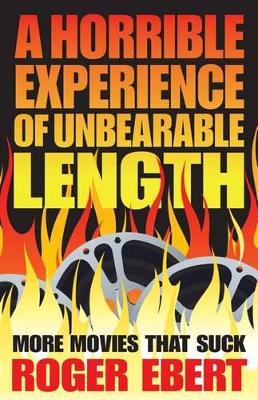 More scathing than a thumbs down, more inflamed than burning film in an overheated projectora "such are the reviews that Roger Ebert has penned about bad movies. Collected here are more than 200 of his most biting, sarcastic, and funny critiques, selected from those unlucky movies that garnered a rating of a mere two stars or fewer. Roger Ebert's "I Hated, Hated, Hated This Movie" and "Your Movie Sucks," which gathered some of his most scathing reviews, were best-sellers. This new collection continues the tradition, reviewing not only movies that were at the bottom of the barrel, but also movies that he found underneath the barrel. "A Horrible Experience of Unbearable Length" collects more than 200 of his reviews since 2006 in which he gave movies two stars or fewer. Known for his fair-minded and well-written film reviews, Roger is at his razor-sharp humorous best when skewering bad movies. Consider this opener for the one-star "Your Highness" ""Your Highness" is a juvenile excrescence that feels like the work of 11-year-old boys in love with dungeons, dragons, warrior women, pot, boobs, and four-letter words. That this is the work of David Gordon Green beggars the imagination. One of its heroes wears the penis of a minotaur on a string around his neck. I hate it when that happens." And finally, the inspiration for the title of this book, the one-star "Transformers: Revenge of the Fallen" "Transformers: Revenge of the Fallen" is a horrible experience of unbearable length, briefly punctuated by three or four amusing moments. One of these involves a doglike robot humping the leg of the heroine. If you want to save yourself the ticket price go, go into the kitchen, cue up a male choir singing the music of hell, and get a kid to start banging pots and pans together. Then close your eyes and use your imagination." Movie buffs and humor lovers alike will relish this treasury of movies so bad that you may just want to see them for a good laugh

» Have you read this book? We'd like to know what you think about it - write a review about Horrible Experience of Unbearable Length book by Roger Ebert and you'll earn 50c in Boomerang Bucks loyalty dollars (you must be a Boomerang Books Account Holder - it's free to sign up and there are great benefits!)

Roger Ebert is the Pulitzer Prize-winning film critic from the "Chicago Sun-Times." His reviews are syndicated to more than 200 newspapers in the United States and Canada. The American Film Institute and the School of the Art Institute of Chicago have awarded him honorary degrees, and the Online Film Critics Society named his Web site, rogerebert.com, the best online movie-review site.