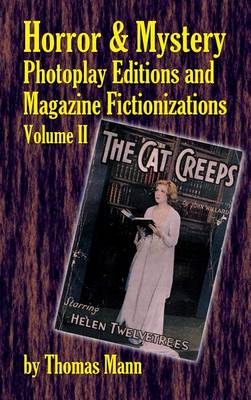 Photoplay editions were movie tie-in books that reprinted the novels on which films were based, illustrated with photos from the movies. Sometimes the novels were newly-created, based on scripts of the films, with publication timed to correspond with the films' release. Comparable fictionizations of contemporary movies frequently appeared in short-story form within many popular movie magazines. Volume I of this catalog (2004) listed over 500 such tie-in stories connected to horror, mystery, science fiction, and related genre films. The present volume updates that list with hundreds of additional entries.

In his Introduction the author also provides a detailed analysis of some of the individual works, showing how many of the published stories, based on advance copies of the film scripts, contain scenes deleted from the release prints. As he did with the book volumes in Volume I, here in Volume II he also provides a fascinating analysis of the film magazines in their larger context as cultural artifacts of bygone eras.

The book concludes with a reprint of a previously unknown short story version of the lost Lon Chaney film, A Blind Bargain (1923).

Thomas Mann is an independent scholar living in Washington, D.C., where he spent over three decades as a general reference librarian in the Main Reading Room of the Library of Congress. He is the author of The Oxford Guide to Library Research (Oxford University Press, 2015).

» Have you read this book? We'd like to know what you think about it - write a review about Horror and Mystery Photoplay Editions and Magazine Fictionizations, Volume II (Hardback) book by Thomas Mann and you'll earn 50c in Boomerang Bucks loyalty dollars (you must be a Boomerang Books Account Holder - it's free to sign up and there are great benefits!)