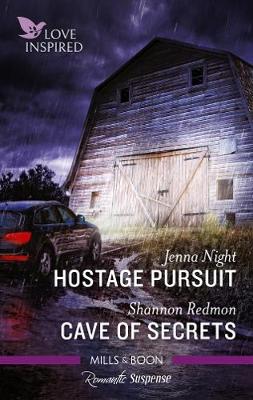 When her mother's abducted, they'll risk everything to save her.

Bounty hunter Daisy Lopez is closing in on two bail-jumping mob hitmen when they kidnap her mother and demand she stop the hunt. But with fellow bounty hunter Martin Silverdeer at her side, she intensifies her efforts instead - and becomes a target. Can Daisy and Martin rescue her mother and foil attempts on their lives before it's too late?

What she uncovers may get her killed...

When Carli Moore finds the body of Zain Wescott's missing sister on her family's ranch, Zain is convinced Carli's brother is the murderer. But Carli's sure Zain is wrong, and she'll prove it - if the killer doesn't take out both her and Zain first. Now they just have to live long enough to uncover the truth...and bring a murderer to justice.

» Have you read this book? We'd like to know what you think about it - write a review about Hostage Pursuit/Cave of Secrets book by Jenna Night and you'll earn 50c in Boomerang Bucks loyalty dollars (you must be a Boomerang Books Account Holder - it's free to sign up and there are great benefits!)


A Preview for this title is currently not available.
More Books By Jenna Night
View All