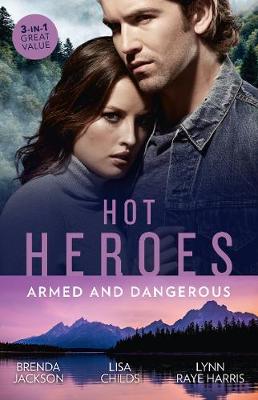 Hot Heroes: Armed And Dangerous/Bane/Beauty and the Bodyguard/Captive but Forbidden

Description - Hot Heroes: Armed And Dangerous/Bane/Beauty and the Bodyguard/Captive but Forbidden by Lisa Childs

After five years, navy SEAL Brisbane Westmoreland is back home on his ranch and ready to reclaim the woman he left behind. But when he tracks her to Dallas, he's in for a shock.

Crystal Newsome isn't ready to forgive Bane for saying he loved her then vanishing from her life. Only now the beautiful chemist needs his protection. As their own irresistible chemistry takes over once again, can Bane keep Crystal safe and convince her they can have the second chance they both deserve?

Beauty And The Bodyguard - Lisa Childs

Bride-to-be Megan Lynch has just learned her ex, presumed dead Marine Gage Huxton, is alive after surviving enemy captivity. But before she can break up with her fiance, gunmen storm her wedding and take hostages! Megan will do anything to stay alive - for herself and a second chance with Gage. But there's more terror to endure before she can say yes to the dress - and her dream groom!

What do the gunmen want? Gage works double time to unravel the mystery and save the beauty who still holds his heart. As the wedding crashers open fire, Gage puts his life on the line to protect Megan and convince her of his love.

The news that wild socialite Veronica St. Germaine has cleaned up her act and stepped into her father's shoes as ruler of a Mediterranean principality creates a tabloid frenzy! But it's not just the paparazzi that are out for blood...

Duty demands that bodyguard Rajesh Vala must protect Veronica - whatever the cost... But Veronica has always rebelled against commands, and she isn't making Raj's job easy! He calls it 'safeguarding.' She calls it being held captive at his beach house. Both realise that the attraction between them is inconvenient...Veronica is forbidden not for bedding!

Book Reviews - Hot Heroes: Armed And Dangerous/Bane/Beauty and the Bodyguard/Captive but Forbidden by Lisa Childs

» Have you read this book? We'd like to know what you think about it - write a review about Hot Heroes: Armed And Dangerous/Bane/Beauty and the Bodyguard/Captive but Forbidden book by Lisa Childs and you'll earn 50c in Boomerang Bucks loyalty dollars (you must be a Boomerang Books Account Holder - it's free to sign up and there are great benefits!)


A Preview for this title is currently not available.
More Books By Lisa Childs
View All