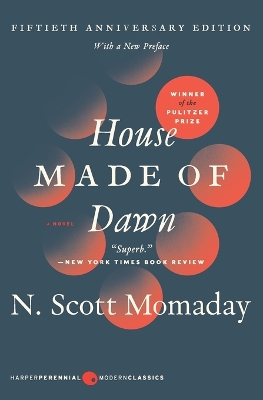 "Both a masterpiece about the universal human condition and a masterpiece of Native American literature. . . . A book everyone should read for the joy and emotion of the language it contains." - The Paris Review

A special 50th anniversary edition of the magnificent Pulitzer Prize-winning novel from renowned Kiowa writer and poet N. Scott Momaday, with a new preface by the author

A young Native American, Abel has come home from war to find himself caught between two worlds. The first is the world of his father's, wedding him to the rhythm of the seasons, the harsh beauty of the land, and the ancient rites and traditions of his people. But the other world-modern, industrial America-pulls at Abel, demanding his loyalty, trying to claim his soul, and goading him into a destructive, compulsive cycle of depravity and disgust.

An American classic, House Made of Dawn is at once a tragic tale about the disabling effects of war and cultural separation, and a hopeful story of a stranger in his native land, finding his way back to all that is familiar and sacred.

» Have you read this book? We'd like to know what you think about it - write a review about House Made Of Dawn [50th Anniversary Edition] book by N. Scott Momaday and you'll earn 50c in Boomerang Bucks loyalty dollars (you must be a Boomerang Books Account Holder - it's free to sign up and there are great benefits!)


A Preview for this title is currently not available.
More Books By N. Scott Momaday
View All