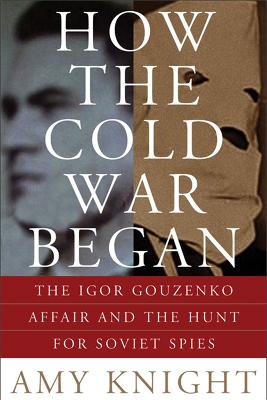 How the Cold War Began

Description - How the Cold War Began by Amy Knight

On September 5, 1945, Soviet cipher clerk Igor Gouzenko severed ties with his embassy in Ottawa, Canada, reporting allegations to authorities of a Soviet espionage network in North America. His defection , the first following the end of WWII, occurring less than a month after atomic bombs exploded over Japan , sent shockwaves through Washington, London, and Ottawa. The three allies, who until weeks earlier had been aligned with the Soviets, feared that key atomic secrets had been given to Russian agents, affecting the balance of postwar power. In her riveting narrative, Amy Knight documents how Gouzenko's defection, and the events that followed it, triggered Cold War fears and altered the course of modern history. Knight sheds new light on the Gouzenko Affair, showing how J. Edgar Hoover hoped to discredit the Truman administration by incriminating U.S. government insiders Alger Hiss and Harry Dexter White. She also probes Gouzenko's motives for defecting and brilliantly connects these events to the strained relations between the Soviet Union and the West that marked the beginning of the Cold War.

Book Reviews - How the Cold War Began by Amy Knight

» Have you read this book? We'd like to know what you think about it - write a review about How the Cold War Began book by Amy Knight and you'll earn 50c in Boomerang Bucks loyalty dollars (you must be a Boomerang Books Account Holder - it's free to sign up and there are great benefits!)

Amy Knight has a Ph.D. in Russian politics from the London School of Economics. She has been a Fellow at the Woodrow Wilson International centre for Scholars in Washington, DC. She has written frequently for the New York Review of Books, the New York Times, and the Washington Post. Her previous books include Beria: Stalin's First Lieutenant, Spies Without Cloaks: The KGB's Successors, and Who Killed Kirov? The Kremlin's Greatest Mystery. She divides her time between Ottawa and Switzerland.

A Preview for this title is currently not available.
More Books By Amy Knight
View All

The Moscow Bombings of September 1999 - Examinations of Russian Terrorist Attacks at the Onset of Vladimir Putin`s Rule
$68.36 $75.95