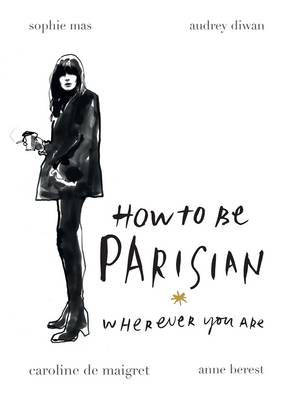 How To Be Parisian Wherever You Are

Description - How To Be Parisian Wherever You Are by Anne Berest

How to Be a Parisian brilliantly deconstructs the French woman's views on culture, fashion and attitude. Unlike other books on French style, this illustrated handbook is full of wit and self-deprecating humour. Authors - Anne Berest, Audrey Diwan, Caroline De Maigret and Sophie Mas - are bohemian free-thinkers and iconoclasts, and they are not afraid to cut through some of the myths. They say what you don't expect to hear, just the way you want to hear it. They are not against smoking in bed, and all for art, politics and culture, making everything look easy, and going against the grain.

Including 80 black and white and colour pictures, many taken by the authors, How to Be a Parisian explains those confusing subjects of clothes, makeup, men, culture and lifestyle as only a true Parisienne can.

On the style front-
You don't always have to be made up, but you should always be well dressed.
Your look should always have one thing left undone - the devil is in the detail.
Either go all grey hair or no grey hair. Salt and pepper is for the table.
Or on how to answer the phone when he finally calls-
The Parisienne lets the phone ring. (She's not waiting by the phone.)
She feigns surprise upon hearing his voice. (She wasn't expecting his call.)
She asks if she can call him back in five minutes. (She's in the middle of something.)
The thing is, she's not alone... (Et oui- you should never have kept her waiting.)
What the Parisian won't let near her wardrobe-
Logos. You are not a billboard.
Ugg Boots. Enough said. Don't even ask.
Skimpy top. Because you're not fifteen anymore.
The fake designer bag. Like fake breasts, you can't fix your insecurities through forgery.
The ideal man to be seen with-
He's not muscular (You'd rather think of him reading a book than lifting weights)
He's unshaven (Just enough so that you never fully see the man behind the stubble)
He's funny (Until he disappears)
He's got something special (And it's not a car)
There are many books on a Parisian's bookshelf-
The books you claim you've read so many times that you actually believe you have.
The books you read in school of which you only remember the main character's name.
The books that you've been promising yourself you'll read next summer...for the past ten years.
The books that you think make you cool.
The books you keep for your children, just in case you ever have any.
The books you own simply because you must and, taken together, form intangible proof that you are well read.

Buy How To Be Parisian Wherever You Are by Anne Berest from Australia's Online Independent Bookstore, Boomerang Books. 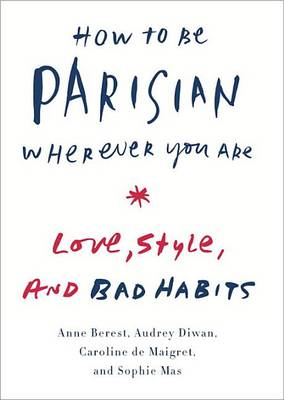 » Have you read this book? We'd like to know what you think about it - write a review about How To Be Parisian Wherever You Are book by Anne Berest and you'll earn 50c in Boomerang Bucks loyalty dollars (you must be a Boomerang Books Account Holder - it's free to sign up and there are great benefits!)

After studying Baroque Literature at the Sorbonne, Anne Berest worked at the Theatre du Rond-Point des Champs-Elysees. Her first two novels were published by Seuil and Grasset, and she is working on her third. In 2011, she wrote a weekly column on life in Paris for the national Sunday paper, JDD. An editor of the Culture section of Glamour magazine, Audrey Diwan took over the French edition of the magazine Stylist. The author of two novels, she has written the script for La French starring Jean Dujardin, the first film since he won his 2012 Oscar. She is also working on her first feature as a director. After studing literature at the Sorbonne, Caroline De Maigret moved to New York to model. She returned to Paris in 2006 to found her music label, Bonus Tracks Records. In 2012, De Maigret became a Chanel Ambassador. Sophie Mas graduated from Sciences Po and moved to Los Angeles. A film producer, she is collaborating with directors such as Gaspar Noe and James Gray, and working on the film adaptation of the Bob Dylan album Blood on the Tracks.