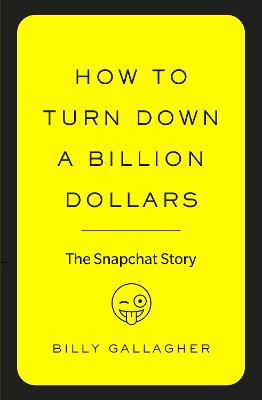 How to Turn Down a Billion Dollars

Description - How to Turn Down a Billion Dollars by Billy Gallagher

'A fast-paced, highly readable history of one of the defining companies of our time. If you're interested in Snapchat, or just plain mystified by it, you must read this book' -- Brad Stone

Would you turn down three billion dollars from Mark Zuckerberg?

When he was just twenty-three years old, Evan Spiegel, the brash CEO of the social network Snapchat, stunned the world when he and his co-founders walked away from a three-billion-dollar offer from Facebook- how could an app teenagers use to text dirty photos dream of a higher valuation? Was this hubris, or genius?

In How to Turn Down a Billion Dollars, Billy Gallagher takes us inside the rise of one of Silicon Valley's hottest start-ups. Snapchat began as a late-night dorm room revelation before Spiegel went on to make a name for himself as a visionary CEO worth billions, linked to celebrities like Taylor Swift and his fiancee, Miranda Kerr.

A fellow Stanford undergrad and fraternity brother of the company's founding trio, Billy Gallagher has covered Snapchat from the start. His inside account offers an entertaining trip through the excess and drama of the hazy early days with a professional insight into the challenges Snapchat faces as it transitions from a playful app to one of the tech industry's preeminent public companies. In the tradition of great business narratives, How to Turn Down a Billion Dollars offers the definitive account of a company whose goal is no less than to remake the future of entertainment.

Buy How to Turn Down a Billion Dollars by Billy Gallagher from Australia's Online Independent Bookstore, Boomerang Books. 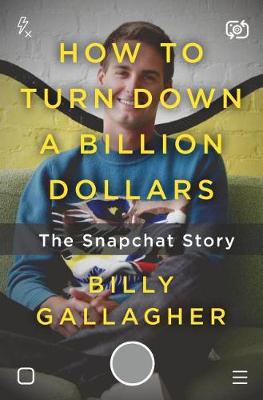 » Have you read this book? We'd like to know what you think about it - write a review about How to Turn Down a Billion Dollars book by Billy Gallagher and you'll earn 50c in Boomerang Bucks loyalty dollars (you must be a Boomerang Books Account Holder - it's free to sign up and there are great benefits!)

BILLY GALLAGHER is an MBA candidate at Stanford's Graduate School of Business. He has worked in venture capital and as a writer at TechCrunch, which he joined as a Stanford sophomore, writing a profile of a popular startup on campus- Snapchat. Billy wrote over a dozen exclusive pieces on Snapchat. His writing has also appeared in the New York Times and Playboy.

A Preview for this title is currently not available.
More Books By Billy Gallagher
View All