How to Vote Progressive in Australia

Description - How to Vote Progressive in Australia by Dennis Altman

Red or Green? Traditionally, Australian progressives have supported the Australian Labor Party; increasingly, the Greens appeal. What are the key differences between the parties? Is greater collaboration desirable? Is it likely?
Some progressives remain strongly committed to Labor or the Greens. Others have abandoned one or other of the parties from bitter experience. Others still are genuinely undecided, or seek to promote greater understanding and cooperation. What is the best way forward?
This volume brings together a range of party leaders, veterans, and academic experts to tackle these important questions. Deliberately pluralistic, it encompasses strongly divergent views. Dedicated to progressive change, it aims both to capture and to advance a vital public debate.
Featuring essays from Carmen Lawrence, Scott Ludlam, Van Badham, Adam Bandt, Felicity Wade, Peter Van Onselen, Andrew Giles, Ellen Sandell, Andrew Leigh, David Mejia-Canales, James Tierney, Shaun Wilson, Simon Copland, Nicholas Barry, Stewart Jackson and Narelle Miragliotta.

Other Editions - How to Vote Progressive in Australia by Dennis Altman 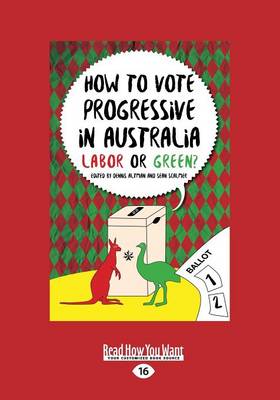 Book Reviews - How to Vote Progressive in Australia by Dennis Altman

» Have you read this book? We'd like to know what you think about it - write a review about How to Vote Progressive in Australia book by Dennis Altman and you'll earn 50c in Boomerang Bucks loyalty dollars (you must be a Boomerang Books Account Holder - it's free to sign up and there are great benefits!)

Dennis Altman, a Professorial Fellow in Human Security at LaTrobe University, has published thirteen books, most recently The End of the Homosexual? and (with Jon Symons) Queer Wars. In 2006, The Bulletin listed Dennis Altman as one of the 100 most influential Australians ever, and he was appointed a Member of the Order of Australia in 2008. Sean Scalmer is Associate Professor of History at the University of Melbourne. He is the author of Dissent Events: Protest, the Media, and the Political Gimmick in Australia (UNSW, 2002) and Gandhi in the West: The Mahatma and the Rise of Radical Protest (Cambridge, 2011).

A Preview for this title is currently not available.
More Books By Dennis Altman
View All