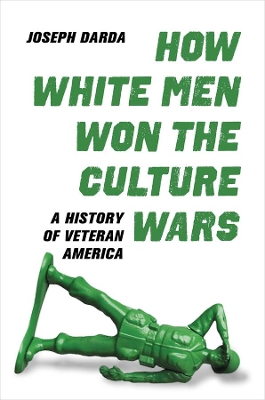 How White Men Won the Culture Wars: A History of Veteran America

Description - How White Men Won the Culture Wars: A History of Veteran America by Joseph Darda

"If war among the whites brought peace and liberty to the blacks," Frederick Douglass asked in 1875, peering into the nation's future, "what will peace among the whites bring?" The answer then and now, after civil war and civil rights: a white reunion disguised as a veterans' reunion.

How White Men Won the Culture Wars shows how a broad contingent of white men--conservative and liberal, hawk and dove, vet and nonvet--transformed the Vietnam War into a staging ground for a post-civil rights white racial reconciliation. Conservatives could celebrate white vets as deracinated embodiments of the nation. Liberals could treat them as minoritized heroes whose voices must be heard. Erasing Americans of color, Southeast Asians, and women from the war, white men could agree, after civil rights and feminism, that they had suffered and deserved more. From the POW/MIA and veterans' mental health movements to Rambo and "Born in the U.S.A.," they remade their racial identities for an age of color blindness and multiculturalism in the image of the Vietnam vet. No one wins in a culture war-except, Joseph Darda argues, white men dressed in army green.

» Have you read this book? We'd like to know what you think about it - write a review about How White Men Won the Culture Wars: A History of Veteran America book by Joseph Darda and you'll earn 50c in Boomerang Bucks loyalty dollars (you must be a Boomerang Books Account Holder - it's free to sign up and there are great benefits!)


A Preview for this title is currently not available.
More Books By Joseph Darda
View All