Hugh Despenser the Younger and Edward II: Downfall of a King's Favourite

Description - Hugh Despenser the Younger and Edward II: Downfall of a King's Favourite by Warner, Kathryn

Hugh Despenser the Younger and Edward II tells the story of the greatest villain of the fourteenth century', his dazzling rise as favourite to the king and his disastrous fall. Born in the late 1280s, Hugh married King Edward I of England's eldest granddaughter when he was a teenager. Ambitious and greedy to an astonishing degree, Hugh chose a startling route to power: he seduced his wife's uncle, the young King Edward II, and became the richest and most powerful man in the country in the 1320s. For years he dominated the English government and foreign policy, and took whatever lands he felt like by both quasi-legal and illegal methods, with the king's connivance. His actions were to bring both himself and Edward II down, and Hugh was directly responsible for the first forced abdication of a king in English history; he had made the horrible mistake of alienating and insulting Edward's queen Isabella of France, who loathed him, and who had him slowly and grotesquely executed in her presence in November 1326. AUTHOR: Kathryn Warner holds a BA and an MA with Distinction in medieval history and literature from the University of Manchester. She is the author of biographies about Edward II and his queen Isabella and runs the popular blog, edwardthesecond.blogspot.co.uk. Kathryn has had work published in the English Historical Review, Fourteenth Century England and the BBC History Magazine, has given a paper at the International Medieval Congress, and appeared in a BBC documentary. A well-known author of fourteenth century history, this is her first book for Pen and Sword.

Other Editions - Hugh Despenser the Younger and Edward II: Downfall of a King's Favourite by Warner, Kathryn 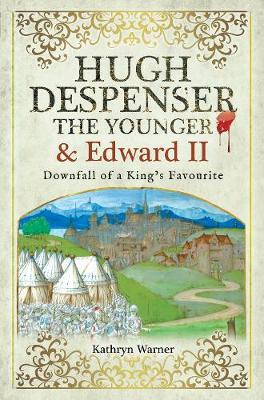 » Have you read this book? We'd like to know what you think about it - write a review about Hugh Despenser the Younger and Edward II: Downfall of a King's Favourite book by Warner, Kathryn and you'll earn 50c in Boomerang Bucks loyalty dollars (you must be a Boomerang Books Account Holder - it's free to sign up and there are great benefits!)


A Preview for this title is currently not available.
More Books By Warner, Kathryn
View All

Following in the Footsteps of Edward II: A Historical Guide to the Medieval King
Available, ships in 7-10 business days
$31.44 $36.99

Edward II's Nieces: The Clare Sisters: Powerful Pawns of the Crown
No Stock on Hand, Supplier Has No Due Date for Supply.
$67.50 $75.00