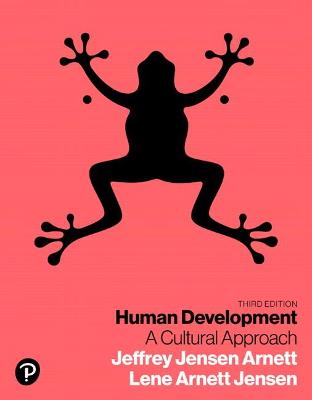 For courses in Lifespan Development

Help students understand how culture impacts development - and why it matters
Human Development: A Cultural Approach leads students to examine all stages of development through the engaging lens of culture. Jeffrey Jensen Arnett and new coauthor Lene Arnett Jensen integrate cross-cultural examples throughout the narrative to reveal the impact of cultural factors both in the US and around the world. The 3rd Edition includes thoroughly updated research and data for a learning experience that best prepares students to face challenges in our diverse and globalised world - whether they travel the globe or remain in their hometowns.

» Have you read this book? We'd like to know what you think about it - write a review about Human Development book by Jeffery Jensen Arnett and you'll earn 50c in Boomerang Bucks loyalty dollars (you must be a Boomerang Books Account Holder - it's free to sign up and there are great benefits!)

Jeffrey Jensen Arnett is a Research Professor in the Department of Psychology at Clark University in Worcester, Massachusetts. He received his Ph.D. in developmental psychology in 1986 from the University of Virginia, and did three years of postdoctoral work at the University of Chicago. From 1992 through 1998 he was Associate Professor in the Department of Human Development and Family Studies at the University of Missouri, where he taught a 300-student life span development course every semester. In the fall of 2005, he was a Fulbright Scholar at the University of Copenhagen in Denmark; in 2010-2011 he was the Nehru Chair at Maharaja Sayajirao University in India; and in 2017-2018 he was a Visiting Professor at the University of Bordeaux in France. His primary scholarly interest for the past 20 years has been in emerging adulthood. He coined the term, and he has conducted research on emerging adults concerning a wide variety of topics, involving several different ethnic groups in American society. He is the Founding President and Executive Director of the Society for the Study of Emerging Adulthood (SSEA; www.ssea.org). From 2005 to 2014 he was the editor of the Journal of Adolescent Research, and currently he is on the Editorial Board of JAR and five other journals. He has published many theoretical and research papers on emerging adulthood in peer-reviewed journals, as well as the book Emerging Adulthood: The Winding Road from the Late Teens Through the Twenties (2015, 2nd edition, Oxford University Press), among many others. For more information, see www.jeffreyarnett.com. Lene Arnett Jensen is Associate Professor in the Department of Psychology at Clark University in Worcester, Massachusetts. She received her Ph.D. in developmental psychology in 1994 from the University of Chicago, and did a one-year postdoctoral fellowship at the University of California--Berkeley. Prior to coming to Clark University, she taught at the University of Missouri and Catholic University of America. She has also been a visiting professor at Stanford University, Aalborg University in Denmark, Maharaja Sayajirao University in India, and the University of Bordeaux in France. She aims through scholarship and professional collaboration to move the discipline of psychology toward understanding development both in terms of what is universal and what is cultural. She terms this a "cultural-developmental approach." Her research addresses moral development and cultural identity formation. Together with her students, she has conducted research in countries such as Denmark, India, Thailand, Turkey, and the United States. Her publications include New Horizons in Developmental Theory and Research (2005, with Reed Larson, Jossey-Bass/Wiley), Immigrant Civic Engagement: New Translations (2008, with Constance Flanagan, Taylor-Francis), Bridging Cultural and Developmental Psychology: New Syntheses for Theory, Research and Policy (2011, Oxford University Press), the Oxford Handbook of Human Development and Culture (2015, Oxford University Press), Moral Development in a Global World: Research from a Cultural-Developmental Perspective (2015, Cambridge University Press), and the Oxford Handbook of Moral Development (forthcoming, Oxford University Press). From 2004 to 2015, she was editor-in-chief for the journal New Directions for Child and Adolescent Development (with Reed Larson). She served as program chair for the 2012 biennial conference of the Society for Research on Adolescence (with Xinyin Chen), and currently serves on awards committees for the Society for Research on Child Development (SRCD) and the Society for Research on Adolescence (SRA). For more information, see www.lenearnettjensen.com. Jeff and Lene live in Worcester, Massachusetts, with their twins, Miles and Paris.

A Preview for this title is currently not available.
More Books By Jeffery Jensen Arnett
View All