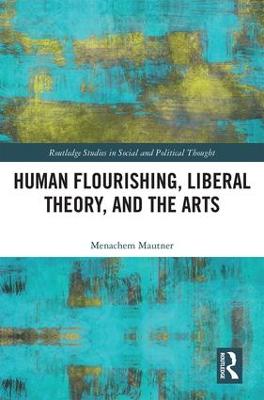 A Liberalism of Flourishing

This book claims that in addition to autonomy, liberal tradition recognizes human flourishing as an ideal of the good life. There are two versions of the liberalism of flourishing: for one the good life consists in the ability of an individual to develop her intellectual and moral capabilities, and for the other the good life is one in which an individual succeeds in materializing her varied human capabilities. Both versions expect the state to create the background conditions for flourishing.

Political theorists and lawyers will enjoy engaging with this version of liberalism, as will students of social democracy and art policy.

» Have you read this book? We'd like to know what you think about it - write a review about Human Flourishing, Liberal Theory, and the Arts book by Menachem Mautner and you'll earn 50c in Boomerang Bucks loyalty dollars (you must be a Boomerang Books Account Holder - it's free to sign up and there are great benefits!)

Menachem Mautner is the Danielle Rubinstein Professor of Comparative Civil Law and Jurisprudence at the Faculty of Law, Tel Aviv University. He holds a LL.B and a LL.M from the Faculty of Law of Tel Aviv University, and a LL.M. and J.S.D. from Yale Law School. He is the author of six books, including Law and the Culture of Israel published in 2011. (An Italian version, Dirito e Cultura in Israele, translated with an introduction by Daniela Bifulco and Fulvio Cortese, was published in 2014 by Franco Angeli, Milano.) Mautner has edited six books, and published over 90 articles and chapters in books in Israel, the United States and Britain (including in the law reviews of Yale, Michigan and Cornell universities). In 2014 he served as head of the "Sapir Prize of Literature Committee", the Israeli equivalent of the British Man Booker Prize for Fiction.

A Preview for this title is currently not available.
More Books By Menachem Mautner
View All