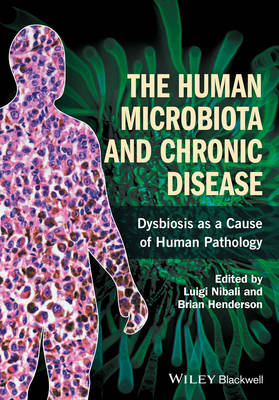 The Human Microbiota and Chronic Disease

Dysbiosis as a Cause of Human Pathology

Description - The Human Microbiota and Chronic Disease by Luigi Nibali

Microbiota-associated pathology can be a direct result of changes in general bacterial composition, such as might be found in periodontitis and bacterial vaginosis, and/or as the result of colonization and/or overgrowth of so called keystone species. The disruption in the composition of the normal human microbiota, or dysbiosis, plays an integral role in human health and human disease.
The Human Microbiota and Human Chronic Disease: Dysbioses as a Cause of Human Pathology discusses the role of the microbiota in maintaining human health. The text introduces the reader to the biology of microbial dysbiosis and its potential role in both bacterial disease and in idiopathic chronic disease states.
Divided into five sections, the text delineates the concept of the human bacterial microbiota with particular attention being paid to the microbiotae of the gut, oral cavity and skin. A key methodology for exploring the microbiota, metagenomics, is also described. The book then shows the reader the cellular, molecular and genetic complexities of the bacterial microbiota, its myriad connections with the host and how these can maintain tissue homeostasis. Chapters then consider the role of dysbioses in human disease states, dealing with two of the commonest bacterial diseases of humanity - periodontitis and bacterial vaginosis. The composition of some, if not all microbiotas can be controlled by the diet and this is also dealt with in this section. The discussion moves on to the major 'idiopathic' diseases afflicting humans, and the potential role that dysbiosis could play in their induction and chronicity. The book then concludes with the therapeutic potential of manipulating the microbiota, introducing the concepts of probiotics, prebiotics and the administration of healthy human faeces (faecal microbiota transplantation), and then hypothesizes as to the future of medical treatment viewed from a microbiota-centric position.

Provides an introduction to dysbiosis, or a disruption in the composition of the normal human microbiota

Explores the relationship humans have with their microbiota, and its significance in human health and disease

Covers host genetic variants and their role in the composition of human microbial biofilms, integral to the relationship between human health and human disease

Authored and edited by leaders in the field, The Human Microbiota and Human Chronic Disease will be an invaluable resource for clinicians, pathologists, immunologists, cell and molecular biologists, biochemists, and system biologists studying cellular and molecular bases of human diseases.

» Have you read this book? We'd like to know what you think about it - write a review about Human Microbiota and Chronic Disease book by Luigi Nibali and you'll earn 50c in Boomerang Bucks loyalty dollars (you must be a Boomerang Books Account Holder - it's free to sign up and there are great benefits!)

A Preview for this title is currently not available.
More Books By Luigi Nibali
View All