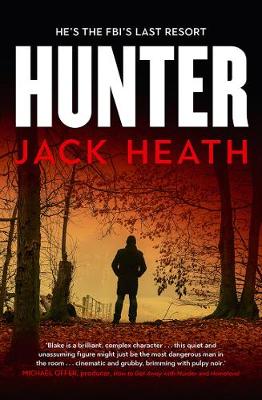 Timothy Blake, ex-consultant for the FBI, now works in body-disposal for a local crime lord. One night he stumbles across a body he wasn't supposed to find and is forced to hide it. When the FBI calls Blake in to investigate a missing university professor, Blake recognises him as the dead man in his freezer.

Then another man goes missing. And another.

There's a serial killer in Houston, Texas, and Blake is running out of time to solve the case. His investigation takes him to a sex doll factory, a sprawling landfill in Louisiana and a secret cabin in the woods.

As they hunt the killer together, FBI agent Reese Thistle starts to warm to Blake - but she also gets closer and closer to discovering his terrible secret.

Can Blake uncover the killer, without being exposed himself?

A confounding, intriguing and wildly suspenseful thriller from the bestselling and acclaimed author of Hangman.

'Jack Heath is worryingly skilled in all things dark and sinister. Luckily he is also bitingly, outrageously funny.' - Sarah Bailey, author of The Dark Lake

'Jack Heath's Hangman is a perverse, twisted take on a crime novel - and I loved every page of it. What a rarity to find a thriller as dark as a Palahniuk and as compulsively readable as a Patterson. Two well-chewed thumbs up for Hangman.' - Gregg Hurwitz, author of New York Times bestseller Hellbent

Other Editions - Hunter by Jack Heath 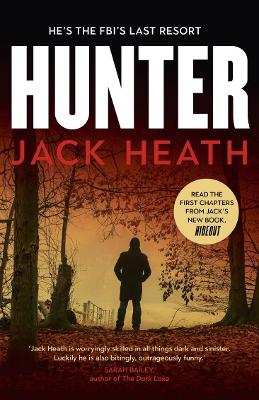 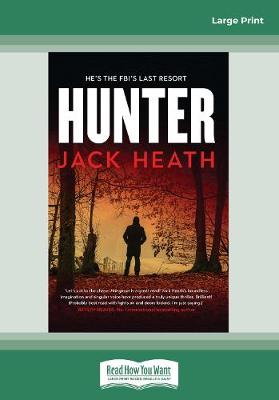 » Have you read this book? We'd like to know what you think about it - write a review about Hunter book by Jack Heath and you'll earn 50c in Boomerang Bucks loyalty dollars (you must be a Boomerang Books Account Holder - it's free to sign up and there are great benefits!)

5 stars “’I cut off X’s head with a breadknife,’ I say. ‘The FBI just found it in my freezer. Half of the police force is looking for you, the other half is looking for me.’”

Hunter is the second book in the Timothy Blake series by award-winning Australian author, Jack Heath. When his unconventional arrangement with the last FBI field office director ended, cannibal Timothy Blake took up a new position as body disposal expert for Houston crime boss, Charlie Warner. Warner’s activities ensure a steady supply of bodies, so Blake doesn’t go hungry. Is this a match made in heaven (well, except for “Two dead bodies concealed in my house. No, wait. Three. I’m losing count”)? Not quite. It seems Warner won’t hesitate to add him to the body count if Blake exceeds the allowable quota of three mistakes. He’s already made two.

That second mistake involves helping his former FBI minder, Agent Reese Thistle with a puzzling case. Timothy Blake finds it hard to resist a body, but “I take cases not because the bad guy gets punished, but because I get so wrapped up in the puzzles that my hunger disappears.” Blake promises Warner he won’t help in any case that involves her, but then the borders begin to blur when he helps himself to a bonus body in the woods. The body Agent Thistle is looking for.

As with Hangman, Heath gives the reader another compulsive read, this one featuring date rape, blackmail, kidnapping and at least ten deaths, most of them violent. As well as his usual activities, Blake visits a rubbish dump and a courtroom, debates the merits of a sex-doll brothel, buries a body, solves a cryptographic code, swallows a mobile phone, tries to quit his job and vows to stop eating people.

Blake’s inner monologue and his unsaid asides are often laugh-out-loud (if darkly) comical: “She stands up as we enter. She wouldn’t make much of a meal. She’s four foot five at the most, even in her polished heels” and “I reuse a lot, but I don’t recycle. One of my bad habits. After you’ve eaten a few people, none of your other flaws seem important enough to fix” are just a two of many that will mean certain readers should avoid devouring this novel in the quiet carriage of public transport.

Heath devises another plot with twists and surprises and non-stop action to keep the pages turning right up to the utterly perfect last line. Again, each chapter begins with a riddle, clues to which often follow in the story. There are certainly spoilers for Hangman in this sequel, so it’s important to read this series in order. Fingers will be crossed that Heath is working on Timothy Blake #3. Truly clever and blackly funny, this sequel does not disappoint. This unbiased review is from an uncorrected proof copy provided by Allen & Unwin.


A Preview for this title is currently not available.
More Books By Jack Heath
View All