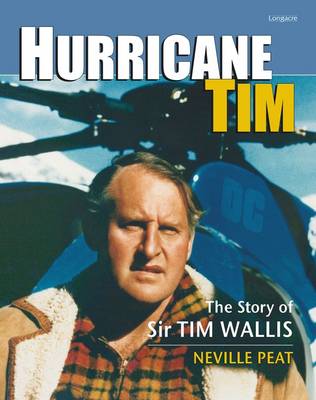 When Tim Wallis's Spitfire crashed at Wanaka airfield in 1996, his accident was reported around the world. This lion-hearted Central Otago man, whose life of risk, adventure and success was the stuff of legend, was, in seconds, literally brought to his knees. Sir Tim Wallis is known as the pilot and hunter who pioneered New Zealand's deer industry. He's the man behind Warbirds over Wanaka, he's had a lifelong passion for collecting, restoring and flying fighter planes (he has the largest private collection of fighter planes in the Southern Hemisphere), and he's also the multi-millionaire who in the last NBR Rich List chalked up $60 million. Tim's life story is told here by writer Neville Peat. The two share a great love of the South: Fiordland, Central Otago, South Westland, the Southern Alps. According to Neville, Tim's story of enterprise and risk is really the 'Last Great New Zealand Adventure'. In HURRICANE TIM we read of adventures which pushed boundaries in places far and wide: not only in the Southern Alps but Russia, China, the forests of Canada and Vanuatu. When Tim broke his back in 1968 doctors told him he'd never walk again. He did.Three times his business came close to collapse and three times he came back from the brink.
After the 1996 crash, Sir Tim was given a 5% chance of survival. But survive he did; he now travels the world and, with astounding determination, has learned to speak and walk again, inspiring all who meet him. What drove this man to take such risks, not only with his person -- at last count nine plane crashes -- but also in business? Author Neville Peat draws us into the hurricane which is Sir Tim Wallis.

» Have you read this book? We'd like to know what you think about it - write a review about Hurricane Tim: The World of Tim Wallis book by Neville Peat and you'll earn 50c in Boomerang Bucks loyalty dollars (you must be a Boomerang Books Account Holder - it's free to sign up and there are great benefits!)


A Preview for this title is currently not available.
More Books By Neville Peat
View All