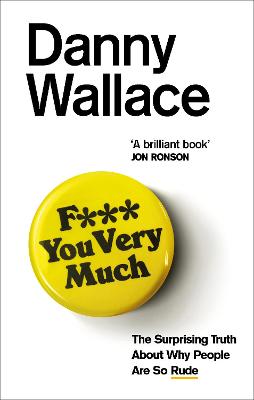 I Can't Believe You Just Said That

The truth about why people are SO rude

Description - I Can't Believe You Just Said That by Danny Wallace

An eye-opening and seriously entertaining investigation into the worst side of human behaviour - by the million copy-selling author of Yes Man.
You're not imagining it. People are getting ruder. And this is a serious problem.

The book that inspired the iTunes Top Ten podcast

Did you know that even one rude comment in a life and death situation can decrease a surgeon's performance by as much as 50%? That we say we don't want rude politicians, but we vote for them anyway? Or that rude language can sway a jury in a criminal case?

Bestselling writer and broadcaster Danny Wallace (Yes Man, Awkward Situations For Men), is on a mission to understand where we have gone wrong. He travels the world interviewing neuroscientists, psychologists, NASA scientists, barristers, bin men, and bellboys. He joins a Radical Honesty group in Germany, talks to drivers about road rage in LA, and confronts his own online troll in a pub.

And in doing so, he uncovers the latest thinking about how we behave, how rudeness, once unleashed, can spread like a virus - and how even one flippant remark can snowball into disaster.

As insightful and enthralling as it is highly entertaining, F*** You Very Much* is an eye-opening exploration into the worst side of human behaviour.

"A cry for human decency. deliciously hilarious. I politely encourage you to read this book. Immediately." Adam Grant author of Originals, Give and Take, Option B

*This book was originally published under the title, I Can't Believe You Just Said That. But we decided it just wasn't rude enough... » Have you read this book? We'd like to know what you think about it - write a review about I Can't Believe You Just Said That book by Danny Wallace and you'll earn 50c in Boomerang Bucks loyalty dollars (you must be a Boomerang Books Account Holder - it's free to sign up and there are great benefits!)

Danny Wallace is a Sunday Times-bestselling author who lives in London. His first book, Join Me, was described as a 'word-of-mouth phenomenon' by The Bookseller and 'one of the funniest stories you will ever read' by the Daily Mail. His second book, Yes Man - in which he decided to say 'Yes' to everything - became a hugely successful film with Jim Carrey in the lead role. His column in ShortList magazine reaches more than 1.3 million readers weekly. He was the PPA Columnist of the Year 2011 and the Arqiva Radio Presenter of the Year 2012 for his work as the host of the triple Sony Award-winning Xfm Breakfast Show with Danny Wallace. GQ magazine has called him- 'One of Britain's great writing talents'. www.dannywallace.com

A Preview for this title is currently not available.
More Books By Danny Wallace
View All

Hamish and the Terrible Terrible Christmas and Other Stories
$11.99 $14.99