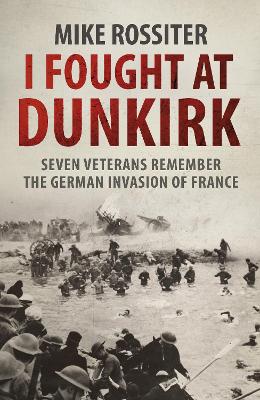 I Fought at Dunkirk

Description - I Fought at Dunkirk by Mike Rossiter

SURVIVOR STORIES FROM DUNKIRK, NOW THE SUBJECT OF A MAJOR FILM FROM CHRISTOPHER NOLAN

When Britain declared war against Germany in September 1939, thousands of young men sailed across the English Channel to fight for their country. Among them were the seven soldiers who share their stories in this book. Some joined up out of patriotism, others for adventure or the prospect of a secure wage. They were fit, trained and proud to wear the armband of the British Expeditionary Forces.

For many, the first months were strangely peaceful, but when the Germans invaded in May 1940 they advanced with shocking speed. The German armoured columns sliced through neutral Holland and Belgium. The French Army collapsed and within a week the soldiers of the BEF were forced to retreat. Fighting tough and bloody rearguard actions, they endured relentless shelling and fearsome dive-bomb attacks. Constantly on the move, and facing a German onslaught on three fronts, they were soon exhausted, hungry and low on ammunition. They headed finally to their one chance of salvation- the beaches of Dunkirk.

Mike Rossiter tells the stories of seven veterans who went through a hellish baptism of fire in the first battles on the front line, and fought in the last-ditch defence of Dunkirk. They saw their comrades bombed and drowned off the beaches. Their accounts give us a fascinating and privileged insight into the reality of the war and what it was really like to face the German Blitzkrieg in 1940. They take us from the confident, idyllic days of the phoney war in the French countryside to the sudden shock of battle, from the fear and confusion of retreat to the wait for an uncertain rescue. These are the compelling stories of seven men who are proud to say I Fought at Dunkirk.

Book Reviews - I Fought at Dunkirk by Mike Rossiter

» Have you read this book? We'd like to know what you think about it - write a review about I Fought at Dunkirk book by Mike Rossiter and you'll earn 50c in Boomerang Bucks loyalty dollars (you must be a Boomerang Books Account Holder - it's free to sign up and there are great benefits!)

Mike Rossiter is the author of a number of bestselling books on men at war - Ark Royal, Sink the Belgrano, Target Basra, I Sank the Bismarck (which he co-authored with John Moffat), Bomber Flight Berlin and We Fought at Arnhem.

A Preview for this title is currently not available.
More Books By Mike Rossiter
View All