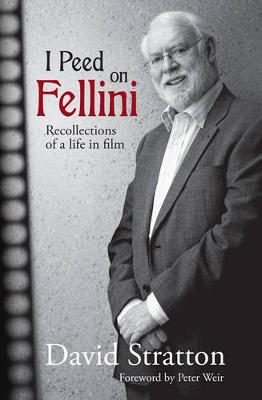 I Peed On Fellini

Description - I Peed On Fellini by David Stratton

I PEED ON FELLINI, the long-awaited memoir from legendary film critic David Stratton, is an honest, funny and thoroughly entertaining journey through a remarkable life in film.Passionate since boyhood about the cinema, Stratton has reviewed thousands of movies, directed and adjudicated at international film festivals, and lectured in film history at the University of Sydney. His best-known role, however, has been as the co-host, with Margaret Pomeranz, of The Movie Show on SBS and -- more recently -- At the Movies on the ABC. Since 1986 the duo has entertained Australia with their honest and often controversial reviews and interviews; for many, they are the most influential film critics in the country.A recipient of both the Longford and Chauvel Awards for his contribution to the Australian film industry, Stratton's hallmarks are his incredible depth of cinematic knowledge, his passionate opposition to censorship and his lifelong commitment to quality film. In this outstanding memoir, he tells his story with candour and verve.

Book Reviews - I Peed On Fellini by David Stratton

» Have you read this book? We'd like to know what you think about it - write a review about I Peed On Fellini book by David Stratton and you'll earn 50c in Boomerang Bucks loyalty dollars (you must be a Boomerang Books Account Holder - it's free to sign up and there are great benefits!)

David Stratton was born in 1939 in Trowbridge, Wiltshire, UK. At the age of nineteen he founded the Melksham and District Film Society. He emigrated to Australia in 1963, where he quickly became involved in the local film scene He was the Director of the Sydney Film Festival for seventeen years. During his career at SBS David was the feature film consultant, presenter of movies, and of course co-host of the highly successful The Movie Show with Margaret Pomeranz for a record eighteen years. Since 1983, David has been a film critic for Variety (published in Los Angeles), a commissioner of the Australian Film Commission, a film critic for The Australian and a lecturer in film history at the University of Sydney. He is also the author of THE LAST NEW WAVE and THE AVOCADO PLANTATION. David has served on several internation film festival juries, including the Berlin International Jury (1982); the Montreal International Jury (1982); and the Venice International Jury (1994). He was also President of FIPRESCI (International Film Critics) Juries in Cannes (twice) and Venice. He is a past president of the Film Critics Circle of Australia. David s long list of awards and achievements incl