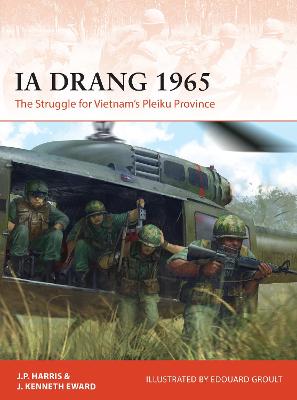 The Pleiku campaign of October-November 1965 was a major event in the Vietnam War, and it is usually regarded as the first substantial battle between the US Army and the People's Army of Vietnam. The brigade-sized actions involving elements of the US 1st Cavalry Division at Landing Zones X-Ray and Albany in the valley of the river Drang have become iconic episodes in the military history of the United States.
In 1965, in an effort to stem the Communist tide, the Americans began to commit substantial conventional ground forces to the war in Vietnam. Amongst these was the 1st Cavalry Division (Airmobile), a new type of formation equipped with a large fleet of helicopters. On 19 October, North Vietnamese forces besieged a Special Forces camp at Plei Me, and after the base was relieved days later, the commander of the 1st Cavalry Division, General Harry Kinnard, advocated using his troops to pursue the retreating Communist forces. A substantial North Vietnamese concentration was discovered, but rather than the badly battered troops the US expected, these were relatively fresh troops that had recently arrived in the Central Highlands. On the morning of 14 November 1965, 1st Battalion, 7th Cavalry, commanded by Lt. Col. Hal Moore, landed at LZ X-Ray to start the first major set-piece battle of the Vietnam War. This title explores the events of the campaign that followed, using detailed maps, specially-commissioned bird's-eye views, and full-colour battlescenes to bring the narrative to life.

» Have you read this book? We'd like to know what you think about it - write a review about Ia Drang 1965: The Struggle for Vietnam's Pleiku Province book by J. P. Harris and you'll earn 50c in Boomerang Bucks loyalty dollars (you must be a Boomerang Books Account Holder - it's free to sign up and there are great benefits!)


A Preview for this title is currently not available.
More Books By J. P. Harris
View All