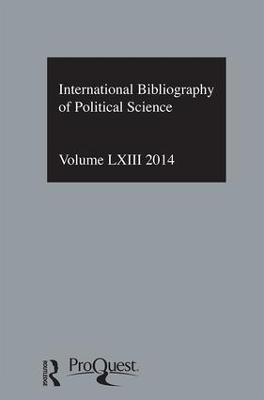 The British Library of Political and Economic Science

Description - IBSS: Political Science: 2014 by The British Library of Political and Economic Science

First published in 1952, the International Bibliography of the Social Sciences (anthropology, economics, political science, and sociology) is well established as a major bibliographic reference for students, researchers and librarians in the social sciences worldwide.
Key features:
* Authority: Rigorous standards are applied to make the IBSS the most authoritative selective bibliography ever produced. Articles and books are selected on merit by some of the world's most expert librarians and academics.
* Breadth: Today the IBSS covers over 2000 journals - more than any other comparable resource. The latest monograph publications are also included.
* International Coverage: The IBSS reviews scholarship published in over thirty languages, including publications from Eastern Europe and the developing world.
* User friendly organization: all non-English titles are word sections. Extensive author, subject and place name indexes are provided in both English and French.

» Have you read this book? We'd like to know what you think about it - write a review about IBSS: Political Science: 2014 book by The British Library of Political and Economic Science and you'll earn 50c in Boomerang Bucks loyalty dollars (you must be a Boomerang Books Account Holder - it's free to sign up and there are great benefits!)


A Preview for this title is currently not available.
More Books By The British Library of Political and Economic Science
View All