Ideologies and the Corruption of Thought

Description - Ideologies and the Corruption of Thought by Joseph Gabel

Thirty-five years ago Joseph Gabel pub lished a modern masterpiece, which in 1975 appeared in English as False Con sciousness: An Essay on Reificalion . Combining his special knowledge of existential psychiatry, axiology, Marx ism, and political history, Gabel pro posed the utterly novel idea that victims of serious mental disturbances (espe cially paranoia and schizophrenia) re produce those distorted thought pat terns commonly associated with ideo logical beliefs at the collective level. Such beliefs initially had been laid bare in the 1920s by Gabel's intellectual progenitors, Karl Mannheim and George Lukacs. Gabel's remarkable innovation was to transfer the private crisis of mental collapse into the analytic frame work previously reserved for ideological critique, making him an expert on what was later called "the micro-macro prob lem."

Ideologies and the Corruption of Thought includes Gabel's essays over the last 40 years, characteristically treating micro and macro theoretical matters simultaneously. Originally writ ten in French and German, they have been recast in idiomatic English and bibliographically updated. Using a unique mode and vocabulary of analy sis, Gabel offers theoretical investiga tions of McCarthyism and Stalinism (original and more recent types), as well as Althusser, Orwell, and Jonathan Swift in his capacity as a psychiatric theorist. He also explores anti-Zionism, anti-Semitism, and a fascinating case study of a paranoid who regarded him self as the pope. In addition this volume includes a range of general commentar ies on ideological "thought," utopianism, and false consciousness.This rich feast of social and political analysis and theory illuminates a range of contemporary concerns - racism, Utopian fantasy, ethnocentrism, anti-Semitism, the interplay of social struc ture and mental illness, and ideological transformations of social life - which only Gabel's unique mixture of the clini cal and the political could achieve. It will be studied with interest by all theo rists and politically alert readers in the social sciences, philosophy, and related fields of study.

Other Editions - Ideologies and the Corruption of Thought by Joseph Gabel 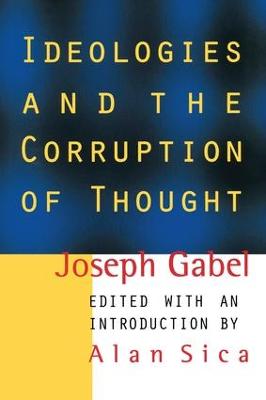 Book Reviews - Ideologies and the Corruption of Thought by Joseph Gabel

» Have you read this book? We'd like to know what you think about it - write a review about Ideologies and the Corruption of Thought book by Joseph Gabel and you'll earn 50c in Boomerang Bucks loyalty dollars (you must be a Boomerang Books Account Holder - it's free to sign up and there are great benefits!)


A Preview for this title is currently not available.
More Books By Joseph Gabel
View All