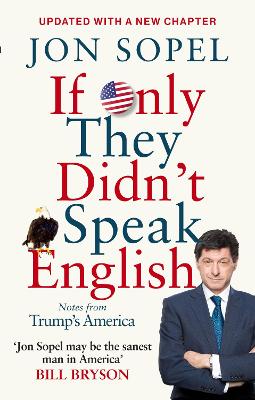 If Only They Didn't Speak English

Description - If Only They Didn't Speak English by Jon Sopel

'You see, if only they didn't speak English in America, then we'd treat it as a foreign country - and probably understand it a lot better''the sanest man in America' - Bill Bryson'Jon Sopel nails it' - Emily Maitlis**With a brand new chapter, charting Trump's first year in power**As the BBC's North America Editor, Jon Sopel has had a pretty busy time of it lately. In the time it's taken for a reality star to go from laughing stock to leader of the free world, Jon has travelled the length and breadth of the United States, experiencing it from a perspective that most of us could only dream of- he has flown aboard Air Force One, interviewed President Obama and has even been described as 'a beauty' by none other than Donald Trump.Through music, film, literature, TV and even through the food we eat and the clothes that we wear we all have a highly developed sense of what America is and through our shared, tangled history we claim a special relationship. But America today feels about as alien a country as you could imagine. It is fearful, angry and impatient for change.In this fascinating, insightful portrait of American life and politics, Jon Sopel sets out to answer our questions about a country that once stood for the grandest of dreams, but which is now mired in a storm of political extremism, racial division and increasingly perverse beliefs.

Other Editions - If Only They Didn't Speak English by Jon Sopel 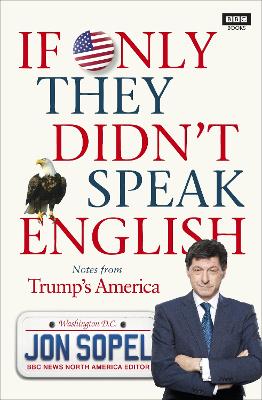 Book Reviews - If Only They Didn't Speak English by Jon Sopel

» Have you read this book? We'd like to know what you think about it - write a review about If Only They Didn't Speak English book by Jon Sopel and you'll earn 50c in Boomerang Bucks loyalty dollars (you must be a Boomerang Books Account Holder - it's free to sign up and there are great benefits!)

Jon Sopel has been the BBC's North America Editor since 2014. As a BBC presenter of 16 years, Jon has worked variously as the corporation's Paris Correspondent, Chief Political Correspondent, hosted both The Politics Show and Newsnight and is a regular on HARDtalk, as well as a number of Radio 4 programmes. As North America Editor, Jon has covered the 2016 election at first hand, reporting for the BBC across TV, radio, and online - accompanying President Obama on Air Force One and interviewing him at the White House. He has travelled extensively across the US and recently rode a Harley Davidson down the West Coast (that wasn't for work though). He lives in Washington and London.

A Preview for this title is currently not available.
More Books By Jon Sopel
View All

UnPresidented: Politics, pandemics and the race that Trumped all others
$38.69 $42.99