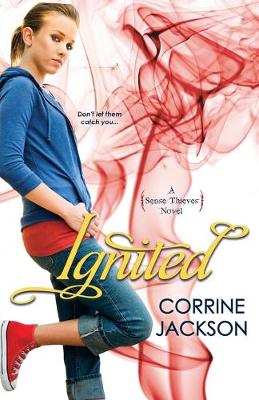 Ever since Remy O'Malley discovered her dual identity as a Healer and a Protector, she's kept alive by staying one step ahead of both sides in this centuries-old war. Now someone's trying to draw her out of hiding, using her kidnapped father as bait. To save him, Remy will need every friend she's got. But as new alliances form, old bonds fray. Her boyfriend Asher is losing his powers, becoming more mortal every time she touches him. Meanwhile, Remy finds herself growing closer to Asher's brother Gabe, even as a family tragedy drives her sister Lucy farther away. On a rescue mission to London, Remy decides she's tired of being the hunted. It's time to end this war once and for all, as Protectors and Healers alike hurtle towards a final, violent confrontation that not everyone will survive.

» Have you read this book? We'd like to know what you think about it - write a review about Ignited book by Corrine Jackson and you'll earn 50c in Boomerang Bucks loyalty dollars (you must be a Boomerang Books Account Holder - it's free to sign up and there are great benefits!)

Corrine Jackson is a San Francisco transplant, having lived on both coasts from Southern California to New York City. For the last seven years, she has sharpened her marketing talents at Alcone Marketing, where she has won several industry awards. She has bachelor's and master's degrees in English, and is in her third year of Spalding University's MFA program. A recipient of a West Chester Poetry Conference scholarship, she is also the former Editor-in-Chief of two literary magazines, including Statement (CSU, Los Angeles) and Dash (CSU, Fullerton).

A Preview for this title is currently not available.
More Books By Corrine Jackson
View All