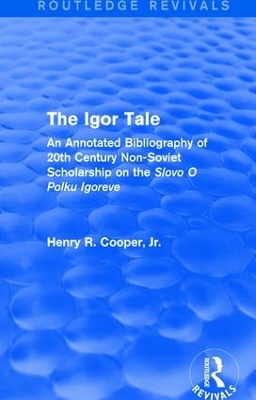 The great Slavic medieval epic, The Igor Tale, recounts the story of a Russian prince who leads his men into battle against the Mongols. In 1935, Soviet scholar P.N. Berkov began to compile a bibliography of Western European translations of the poem, later followed by several Soviet Union biographies compiling the works on the epic that had appeared in the Russian Empire or the Soviet Union. Here, Cooper attempts to remedy the shortcomings of previous scholar work: to seriously survey the large body of non-Soviet scholarship on the poem particularly Western contributions to Igor scholarship. Originally published in 1978, Cooper traces foreign scholarship and translations from 1900-1976 from a wide variety of Western and some Eastern nations including the United States, Great Britain, France, Italy, Poland, Japan and many other countries. This title is a valuable resource for students of Literature and Slavic Studies.

Other Editions - The Igor Tale by Henry R. Cooper, Jr. » Have you read this book? We'd like to know what you think about it - write a review about Igor Tale book by Henry R. Cooper, Jr. and you'll earn 50c in Boomerang Bucks loyalty dollars (you must be a Boomerang Books Account Holder - it's free to sign up and there are great benefits!)


A Preview for this title is currently not available.
More Books By Henry R. Cooper, Jr.
View All