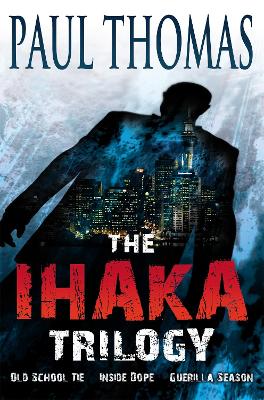 Maverick Maori cop Tito Ihaka, is a detective sergeant in the Auckland CID. Despite treading on numerous toes and breaking most of the rules in the book, Ihaka eventually gets his man - and sometimes his woman.OLD SCHOOL TIE is about the unlocking of a dark 25-year-old secret relating to a teenage girl s mysterious suicide at a private school ball. Freelance journalist Reggie Sparks investigation spills over into an underworld turf war involving the Sydney mafia and a ferocious Maori gang, the Blood Drinkers.INSIDE DOPE involves a race for the lost treasure of the Mr Asia drug syndicate which attracts the attention of a rogue American narcotics agent and the CIA, while GUERILLA SEASON pits Ihaka against a shadowy and sinister terrorist group in a case which turns out to have links to the bombing of the Rainbow Warrior.

» Have you read this book? We'd like to know what you think about it - write a review about Ihaka Trilogy book by Hachette New Zealand and you'll earn 50c in Boomerang Bucks loyalty dollars (you must be a Boomerang Books Account Holder - it's free to sign up and there are great benefits!)

Paul Thomas is the author of seven works of fiction. In addition to the Ihaka novels he has written two Sydney-based crime novels (Final Cut and The Empty Bed), a collection of short stories, Sex Crimes and a New Zealand-based non-crime novel, Work In Progress. He has authored seven sports biographies for Hachette and its predecessors, the most recent being PETER BUSH: A LIFE IN FOCUS. A Whole New Ball Game, his examination of the myths and realities of professional rugby in New Zealand, was published by Hodder Moa Beckett in 2003. His column appears in the Weekend edition of the New Zealand Herald. Previous Books: Peter Bush (TPB Nov 09 9781869710644); Tana Umaga; Foundation Course Drawing; Whole New Ball Game; Dirty Laundry; Straight from the Hart; Old School Tie