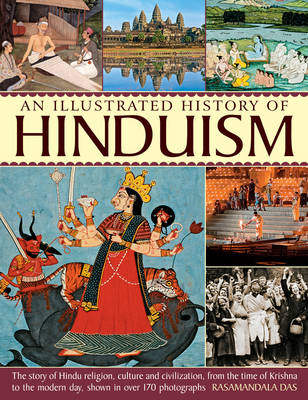 This is a compact yet authoritative history of Hinduism, from its origins over 4000 years ago to the impact of the belief system across the world today. It highlights key figures in Hinduism, including Shankara, Ramanuja, Madhva and, in recent times, Vivekanada, Sahajananda Swami and Bhaktivedanta Swami. It focuses on the major historical events that have shaped Hinduism - the Vedic Period and the North Classical Age, the Mughal Empire and the impact of British Rule. Hindiuism is often called the world's oldest living major religion, and this beautifully illustrated history is an excellent introduction to the subject. It opens with a timeline and an account of how Hinduism has spread over time from India, its country of origin, to become a truly global religion. The central section describes the major holy texts, including the Ramayana, the Mahabharata and the Bhagavad-gita or Song of God. It ends with an exploration of Hinduism's profound teachings about the self, the law of karma, and the cycle of birth and death. This is the perfect book for anyone wanting to discover the history at the heart of Hinduism.

» Have you read this book? We'd like to know what you think about it - write a review about Illustrated Encyclopedia of Hinduism book by Das Rasamandala and you'll earn 50c in Boomerang Bucks loyalty dollars (you must be a Boomerang Books Account Holder - it's free to sign up and there are great benefits!)

Rasamandala Das is a practising member of the Vaishnava tradition and holds an MA in Religious Education from Warwick University. He is co-director of ISKCON Educational Services (the UK's largest provider of educational resources on Hinduism.) He is the author of several key texts on Hinduism, including The Heart of Hinduism, and was commissioned by the Krishna Avanti School (the first Hindu voluntary-aided school in the UK) to help write the Religious Education Syllabus.

A Preview for this title is currently not available.
More Books By Das Rasamandala
View All