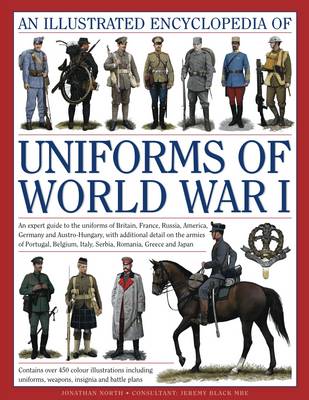 Illustrated Encyclopedia of Uniforms of World War I

The war of 1914 to 1918 was a military, political and social disaster. No other war changed the map of Europe so drastically: four empires disappeared, the German, Austro-Hungarian, Ottoman and the Russian; four defunct dynasties fell, together with their ancillary aristocracies; and more than 15 million people were killed, making it one of the deadliest conflicts in history. The dramatic political and social changes of the period were mirrored in the uniforms of the armed forces, and the contrast between pre-war Europe and 1919 could not be more apparent. The soldiers of 1900 were dressed in bright blues, whites, reds and greens in dashing styles that would have been familiar to the previous century. Those of 1919 were attired in the colours of earth and dust, designed to camouflage and protect from the ever-increasing weight of firepower. Another evolution in warfare was in the hardware and ammunition available. By 1915, the war seemed like a struggle between technologies designed to kill more and attempts to preserve the lives of the soldiery. Uniforms were a key component in the attempt to negate the power exerted over the battlefield by the likes of the Maxim machinegun, France's 75 mm gun or a Mauser fitted with an optical sight. This book charts these developments in fascinating detail: how the remaining reds and blues disappeared and infantry were clothed in browns, greys and greens; how officers sought to make themselves less conspicuous and less of a target, reducing rank insignia to a minimum, leaving swords behind and adopting elements of dress used by other ranks. How armies introduced, developed and modified protective equipment, from helmets to gas masks, and adapted existing equipment and existing procedures for the demands of modern warfare. The illustrations show in painstaking detail the changes, minor distinctions and uniform developments of all the major nations involved in the conflict, while the informative text brings to life one of the darkest periods of European military history. Evocative photographs of the struggle and stunning illustrations of the uniforms show in detail the changes, reforms and modifications of all the major powers, Great Britain, France, Russia, Germany and Austria-Hungary. The book also features the uniforms of America, Portugal, Belgium, Italy, Serbia and Montenegro, Romania, Greece, Japan, the Ottoman Empire and Bulgaria. This unprecedented volume is an incredible visual study of the uniforms of a pivotal period of military history, and of its context.

» Have you read this book? We'd like to know what you think about it - write a review about Illustrated Encyclopedia of Uniforms of World War I book by Jeremy & North, Jonathan Black and you'll earn 50c in Boomerang Bucks loyalty dollars (you must be a Boomerang Books Account Holder - it's free to sign up and there are great benefits!)

Jonathan North is a military historian and editor specializing in Napoleonic warfare, eastern European history and the Great War. He has written, translated, contributed to and edited many publications on aspects of military history and the impact of warfare on society. Consultant Jeremy Black MBE is the most active representative of British academic history in his field. His body of published work adds up to the most sustained presentation of British history in recent decades, and he is a major international expert in military history.