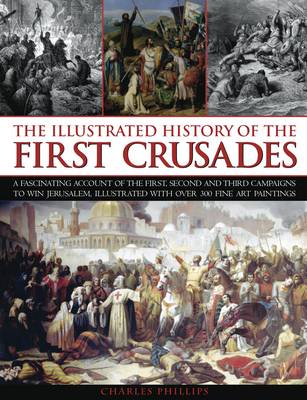 Illustrated History of the First Crusades

In 1096 five great armies left Europe to answer the call from Pope Urban II to ride to the rescue of their fellow Christians in the East, and free the Holy City of Jerusalem from the 'infidels'. After gruelling marches, bitter infighting, desperate privation and brutal battles this first 'crusade' culminated in the triumphant capture of Jerusalem and the establishment of a Christian kingdom in Palestine and Syria that survived until 1291. The second crusade, begun in 1147 and the third, begun in 1189, were less successful but still full of the same fervour, high hopes and soaring ambition as the first. This book covers all three crusades in detail, following the journeys, events, battles and leaders of all three. The crusades were led by princes and kings who became involved for the good of their souls or earthly reputations, but they were dependent on the knights and entourages who fought for precedence and wealth almost as fiercely as they fought the enemy, and all were bolstered by the visionaries and priests who inspired devotion and sacrifice. These different players and their stories are all explored, as well as special sections on the fortresses they erected and the kingdoms they established. Historians argue over the character and legacy of the crusades, but what is certain is that they hold an enduring fascination for modern readers. The crusaders' enterprise retains a heroic element, a seemingly impossible objective entered into with enormous faith, self-belief and courage. However, if the crusades did have a noble and even heroic side, they also cast a deeply troubling shadow across the ages, and studying the causes and events of these medieval wars of faith remains highly relevant. This book discusses all aspects of these turbulent times, and evokes the colourful spirit of the period in over 300 illustrations.

» Have you read this book? We'd like to know what you think about it - write a review about Illustrated History of the First Crusades book by Charles & Taylor, Craig Phillips and you'll earn 50c in Boomerang Bucks loyalty dollars (you must be a Boomerang Books Account Holder - it's free to sign up and there are great benefits!)

Charles Phillips is the author of The Kings and Queens of Ancient Britain (Southwater). He was a contributor to Cassell's Dictionary of Modern Britain and Ancient Civilizations, and to other illustrated histories. He is a graduate of Oxford University and holds an MA from the University of Westminster, London. Consultant Dr Craig Taylor is a Lecturer in Medieval History, and a Fellow of both the Societe de l'Histoire de France and the Royal Historical Society. He works on political thought and public discourse in late medieval France and England, chivalry and the Hundred Years War.

A Preview for this title is currently not available.
More Books By Charles & Taylor, Craig Phillips
View All