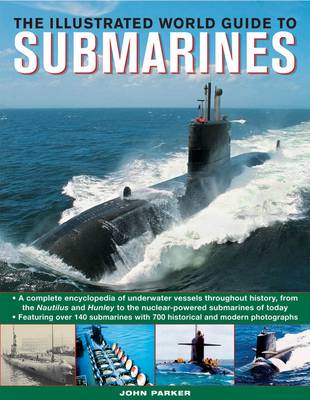 This is a complete encyclopedia of underwater vessels throughout history, from the Nautilus and Hunley to the nuclear-powered submarines of today. It charts a century of submarine development, from the earliest attempts to travel beneath the waves, two World Wars and the Cold War, through to the incredible machines planned for construction in the 21st century. Specification boxes provide at-a-glance information about each submarine's country of origin, length, displacement, speed, armament, propulsion and complement. It features over 700 historical and modern photographs illustrating each type of submarine, plus specially commissioned artworks of selected examples. It includes a glossary of key military terms and abbreviations. This fully illustrated book traces the history of underwater travel, from the earliest attempts to travel beneath the waves to the future possibility of unmanned craft permanently roaming the seas. A country-by-country directory of over 140 submarines provides an in-depth look at the amazing inventiveness of submarine builders. Illustrated with over 700 photographs showing submarines in action, as well as a selection of artworks showing the vessels' main features, this authoritative volume provides both enthusiasts and historians with key information about the world's submarines, and is an essential reference for everyone interested in naval history.

» Have you read this book? We'd like to know what you think about it - write a review about Illustrated World Guide to Submarines book by John Parker and you'll earn 50c in Boomerang Bucks loyalty dollars (you must be a Boomerang Books Account Holder - it's free to sign up and there are great benefits!)

John Parker has written many acclaimed military and investigative projects, as well as numerous high-profile biographies. Some of his many published titles include: The Silent Service: The Inside Story of the Royal Navy's Submarine Heroes; Royal Marines Commandos; Royal Navy Task Force; Royal Air Force Strike Command; The Black Watch; Desert Rats; The Paras; Inside the Foreign Legion; Total Surveillance; and The Killing Factory: The Top Secret World of Germ and Chemical Warfare.

A Preview for this title is currently not available.
More Books By John Parker
View All

The Celestial and Ecclesiastical Hierarchy of Dionysius the Areopagite
$43.48 $48.31