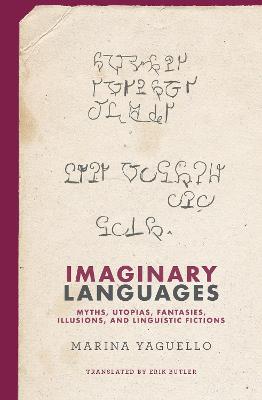 An exploration of the practice of inventing languages, from speaking in tongues to utopian schemes of universality to the discoveries of modern linguistics.

In Imaginary Languages, Marina Yaguello explores the history and practice of inventing languages, from religious speaking in tongues to politically utopian schemes of universality to the discoveries of modern linguistics. She looks for imagined languages that are autonomous systems, complete unto themselves and meant for communal use; imaginary, and therefore unlike both natural languages and historically attested languages; and products of an individual effort to lay hold of language. Inventors of languages, Yaguello writes, are madly in love- they love an object that belongs to them only to the extent that they also share it with a community.

Yaguello investigates the sources of imaginary languages, in myths, dreams, and utopias. She takes readers on a tour of languages invented in literature from the sixteenth to the twentieth century, including that in More's Utopia, Leibniz's "algebra of thought," and Bulwer-Lytton's linguistic fiction. She examines the linguistic fantasies (or madness) of Georgian linguist Nikolai Marr and Swiss medium Hel ne Smith; and considers the quest for the true philosophical language. Yaguello finds two abiding (and somewhat contradictory) forces- the diversity of linguistic experience, which stands opposed to unifying endeavors, and, on the other hand, features shared by all languages (natural or not) and their users, which justifies the universalist hypothesis.

Recent years have seen something of a boom in invented languages, whether artificial languages meant to facilitate international communication or imagined languages constructed as part of science fiction worlds. In Imaginary Languages (an updated and expanded version of the earlier Les Fous du langage, published in English as Lunatic Lovers of Language), Yaguello shows that the invention of language is above all a passionate, dizzying labor of love.

» Have you read this book? We'd like to know what you think about it - write a review about Imaginary Languages: Myths, Utopias, Fantasies, Illusions, and Linguistic Fictions book by Marina Yaguello and you'll earn 50c in Boomerang Bucks loyalty dollars (you must be a Boomerang Books Account Holder - it's free to sign up and there are great benefits!)


A Preview for this title is currently not available.
More Books By Marina Yaguello
View All