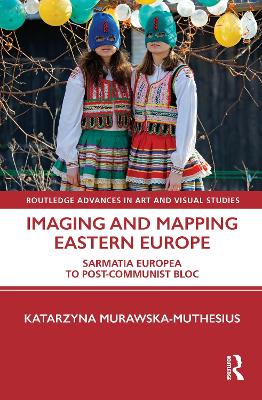 Imaging and Mapping Eastern Europe puts images centre stage and argues for the agency of the visual in the construction of Europe's east as a socio-political and cultural entity. This book probes into the discontinuous processes of mapping the eastern European space and imaging the eastern European body. Beginning from the Renaissance maps of Sarmatia Europea, it moves onto the images of women in ethnic dress on the pages of travellers' reports from the Balkans, to cartoons of children bullied by dictators in the satirical press, to Cold War cartography, and it ends with photos of protesting crowds on contemporary dust jackets.

Studying the eastern European 'iconosphere' leads to the engagement with issues central for image studies and visual culture: word and image relationship, overlaps between the codes of othering and self-fashioning, as well as interaction between the diverse modes of production specific to cartography, travel illustrations, caricature, and book cover design.

This book will be of interest to scholars in art history, visual culture, and central Asian, Russian and Eastern European studies.

» Have you read this book? We'd like to know what you think about it - write a review about Imaging and Mapping Eastern Europe: Sarmatia Europea to Post-Communist Bloc book by Katarzyna Murawska-Muthesius and you'll earn 50c in Boomerang Bucks loyalty dollars (you must be a Boomerang Books Account Holder - it's free to sign up and there are great benefits!)