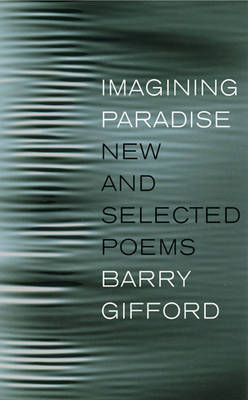 At once erudite and plainspoken, imaginative and grounded in the grittily lunatic fundamentals of the human heart, here is the author's definitive selection of his verse: the writings of an underground poet who lasted. These poems describe a universe that is as populous and diverse as it is ephemeral and evanescent. Born of the world and of books and art in equal measure, they tell of the unyielding granite truths of people's roller-coaster lives. And there's always a poet looking back, facing life and death and everything inbetween...

» Have you read this book? We'd like to know what you think about it - write a review about Imagining Paradise book by Barry Gifford and you'll earn 50c in Boomerang Bucks loyalty dollars (you must be a Boomerang Books Account Holder - it's free to sign up and there are great benefits!)

The author of more than forty works of fiction, nonfiction, and poetry, which have been translated into over twenty-five languages, BARRY GIFFORD writes distinctly American stories for readers around the globe. From screenplays and librettos to his acclaimed Sailor and Lula novels, Gifford's writing is as distinctive as it is difficult to classify. Born in the Seneca Hotel on Chicago's Near North Side, he relocated in his adolescence to New Orleans. The move proved significant: throughout his career, Gifford's fiction--part-noir, part-picaresque, always entertaining--is born of the clash between what he has referred to as his "Northern Side" and "Southern Side." Gifford has been recipient of awards from PEN, the National Endowment for the Arts, the American Library Association, the Writers Guild of America and the Christopher Isherwood Foundation. His novel "Wild at Heart" was adapted into the 1990 Palme d'Or-winning film of the same name. Gifford lives in the San Francisco Bay Area. "From the Trade Paperback edition."