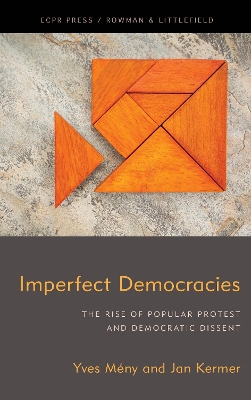 Imperfect Democracies: The Rise of Popular Protest and Democratic Dissent

This book re-examine what democracy is, in the context of democratic disenchantment and surge of support for populist parties, in most, if not all, democratic systems. It argues that these popular protests and claims are not by themselves anti-democratic but they are manifestations of a fundamental misunderstanding about what democracy is and can be. The starting point is to underline that all democracies are the result of an historical 'bricolage' where many heterogeneous components have been included over time and space, becoming part and parcel of what constitutes a democratic system, even when these foreign elements are literally anti-democratic, in the proper sense of the term. Liberalism is at stake.

Many political systems are deemed un-democratic as they tend to become illiberal, forgetting that reforms inspired by liberalism were often directed at limiting, repressing and forbidding the full expression of the will of the people.

Today, democracies are, for the most part, characterized not only by periodic crises and the fall of representative institutions (i.e. political parties) but also by the growing expropriation of the 'political' by non-political institutions. Governance has replaced governments; elections do not matter, or at least, it seems that a growing number of citizens feel apathetic and resent the political process. Populism is a radical by-product of a popular rage which has not found the appropriate channels to convey its messages and aspirations for change.

» Have you read this book? We'd like to know what you think about it - write a review about Imperfect Democracies: The Rise of Popular Protest and Democratic Dissent book by Yves Meny and you'll earn 50c in Boomerang Bucks loyalty dollars (you must be a Boomerang Books Account Holder - it's free to sign up and there are great benefits!)


A Preview for this title is currently not available.
More Books By Yves Meny
View All