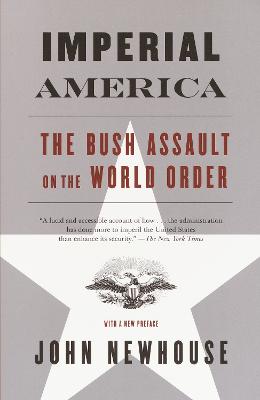 In the aftermath of September 11, 2001, most of the world was ready to accept American leadership in a war against terrorism. Yet within a year the United States was estranged from its allies and enmeshed in a costly and increasingly deadly occupation of Iraq, while virtually ignoring potentially great threats from other parts of the world. In this measured but forcefully argued book, the distinguished foreign correspondent John Newhouse shows what went wrong.

» Have you read this book? We'd like to know what you think about it - write a review about Imperial America book by John Newhouse and you'll earn 50c in Boomerang Bucks loyalty dollars (you must be a Boomerang Books Account Holder - it's free to sign up and there are great benefits!)

John Newhouse covered foreign policy for The New Yorker throughout the 1980s and early 1990s and wrote numerous profiles of world figures. He has served the U.S. government as assistant director of the U.S. Arms Control and Disarmament Agency and was senior policy adviser for European affairs in the State Department during the second half of the Clinton administration. His books include Europe Adrift and War and Peace in the Nuclear Age. He is currently a senior fellow at the Center for Defense Information. He lives in Washington, D.C.