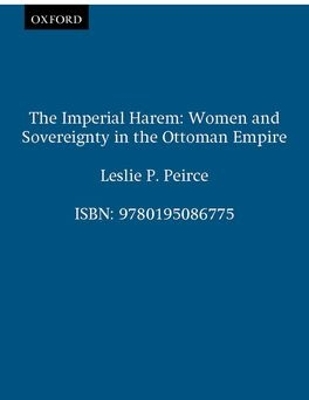 Women and Sovereignty in the Ottoman Empire

The unprecedented political power of the Ottoman imperial harem in the sixteenth and seventeenth centuries is widely viewed as illegitimate and corrupting. This book examines the sources of royal women's power and assesses the reactions of contemporaries, which ranged from loyal devotion to armed opposition. By examining political action in the context of household networks, Leslie Peirce demonstrates that female power was a logical, indeed an intended,
consequence of political structures. Royal women were custodians of sovereign power, training their sons in its use and exercising it directly as regents when necessary. Furthermore, they played central roles
in the public culture of sovereignty--royal ceremonial, monumental building, and patronage of artistic production. The Imperial Harem argues that the exercise of political power was tied to definitions of sexuality. Within the dynasty, the hierarchy of female power, like the hierarchy of male power, reflected the broader society's control for social control of the sexually active.

» Have you read this book? We'd like to know what you think about it - write a review about Imperial Harem book by Leslie P. Peirce and you'll earn 50c in Boomerang Bucks loyalty dollars (you must be a Boomerang Books Account Holder - it's free to sign up and there are great benefits!)

Leslie P. Peirce is Professor of History and Near Eastern Studies, University of California, Berkeley.