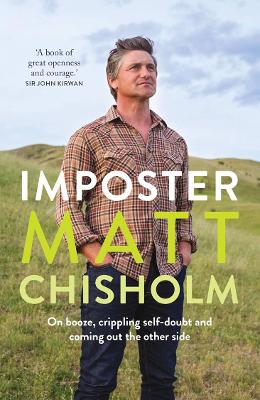 Imposter: On booze, crippling self-doubt and coming out the other side

Description - Imposter: On booze, crippling self-doubt and coming out the other side by Matt Chisholm


'A book of great openness and courage' - Sir John Kirwan

Country boy and television host Matt Chisholm seemed to have it all. With a plum job on TV and a great family, his future looked bright.?

But behind the happy facade, Matt was barely coping, driving himself into the ground with work and withdrawing from everyone but his family. One day something snapped. After admitting in a social media post that he was struggling with depression, Matt was shocked at the outpouring of public support. It would be the catalyst for him to face up to his unhappiness and change his life.

Growing up in Otago, Matt was the sensitive youngest child in a family of four boys, with a difficult home life in which high standards were paramount. After trying his first drink at fourteen, Matt found himself in a decades-long spiral of aimlessness and heavy drinking - despite the physical and mental toll the booze took on him.?

It would take Matt until his thirties to find success as a journalist, always doubting himself and his abilities. After finally giving up drinking at 34, his career went from strength to strength, but the unrelenting pressure of having to perform and his own perfectionist tendencies came at a high cost and he was diagnosed with depression. Something had to give.

Matt and his wife made a choice to leave Auckland and his job, moving to Central Otago with their two young boys to build their own home and enjoy a simpler life.

Imposter reveals the hard-won wisdom Matt has learnt along the way. Poignant and inspiring, this is a helpful book for anyone who is battling their demons.

Buy Imposter: On booze, crippling self-doubt and coming out the other side by Matt Chisholm from Australia's Online Independent Bookstore, Boomerang Books.

Book Reviews - Imposter: On booze, crippling self-doubt and coming out the other side by Matt Chisholm

» Have you read this book? We'd like to know what you think about it - write a review about Imposter: On booze, crippling self-doubt and coming out the other side book by Matt Chisholm and you'll earn 50c in Boomerang Bucks loyalty dollars (you must be a Boomerang Books Account Holder - it's free to sign up and there are great benefits!)

A Preview for this title is currently not available.
More Books By Matt Chisholm
View All