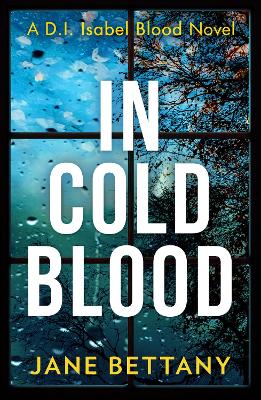 'I read this in one sitting and loved every minute of it. The detective story reads like an episode of Vera.' 5 stars, NetGalley reviewer

No secret can stay buried forever... As the Whitworth family begin renovations on their new home, their plans are brought to an abrupt end when they discover a body buried in the back garden.

DI Isabel Blood and her team are called to investigate, but as she approaches Ecclesdale Drive, a feeling of unease settles in her gut.

The property cordoned off is number 23. The house she used to live in as a child...

The forensic team estimate that the body has been in the ground for up to forty years - coinciding with the time Isabel's family lived in the house.

Isabel's father vanished without a trace when she was fourteen years old. And with her mother remaining tight-lipped about her father's disappearance, Isabel can't escape the unnerving sense of dread that it's his body, buried in the garden.

Fans of Vera, Val McDermid and Elly Griffiths will love In Cold Blood!

"A gripping police procedural thriller that had me engrossed from the first page. The storyline had me intrigued, so much so that I read it in one day." 5 stars, NetGalley reviewer

"Isabel Blood is a great character and I really enjoyed getting to know her. I'm a great fan of police procedural novels and this was an excellent read! The case was a fascinating one and the story was cleverly plotted... with numerous twists and turns and some rather surprising revelations!" 5 stars, NetGalley reviewer

"If you're looking for a cosy crime novel that is packed with suspense, then this is the book for you. A fantastic debut novel that I have no hesitation in recommending." 5 stars, NetGalley reviewer

"This is a fabulous debut crime novel!" 5 stars, NetGalley reviewer

"I loved this book from beginning to end and cannot wait to read more from Jane Bettany." 5 stars, NetGalley reviewer

» Have you read this book? We'd like to know what you think about it - write a review about In Cold Blood book by Jane Bettany and you'll earn 50c in Boomerang Bucks loyalty dollars (you must be a Boomerang Books Account Holder - it's free to sign up and there are great benefits!)

I thoroughly enjoyed reading In Cold Blood by Jane Bettany (not to be confused with Truman Capote's classic non-fiction novel of the same name), a character-driven police procedural / mystery in the more traditional mould. D.I. Isabel Blood is an intuitive and competent detective, based in the (fictional) town of Bainbridge, Derbyshire in the United Kingdom. Siblings Amy and Paul Whitworth are in the process of renovating their first investment property, purchased with the proceeds of their late father's estate. When digging foundations for a new patio, Paul uncovers skeletal human remains. In the midst of a troubling parent-teacher interview with her husband, Bainbridge D.I. Isabel Blood receives a phone call summoning her to the crime scene. But this proves to be no run-of-the-mill murder investigation for D.I. Blood - the house where the discovery has been made is her own childhood home... Further complicating matters, and actually requiring her to take a step back from the investigation (which occurs all too rarely in crime fiction when such situations arise!), is the fact that her own father went missing from the home over forty years ago, never to be heard of again. From this wonderfully fraught premise, the novel unfolds as Blood's team begin sifting through the home's history and attempt to identify the skeleton. In Cold Blood doesn't sit in the dark, twisty thriller end of the genre - while by no means a "cosy mystery", it's more of a character drama, which brought to my mind the late P.D. James's style of writing (which I love). In the course of solving the historical mystery, the central character goes through her own catharsis, gradually uncovering and coming to terms with her family's hazy and rather complicated past. The supporting characters are well-developed and three-dimensional, from Isabel's stickybeak earstwhile neighbour to her small team of detectives and her family at home. Jane Bettany's depiction and understanding of relationships between characters makes this a fascinating read, over and above the main crime investigation plot. I found the pacing of the narrative appropriate to the style of the book, and realistic in the context of a modern team investigating an apparent historical crime. It's certainly not an edge-of-your seat action read, but enthralling in a more subtle way that rewards a thoughtful reader. In Cold Blood was a great read, and I hope that we'll see more of D.I. Isabel Blood in future titles. Highly recommended to readers who enjoy character-based mysteries, complex plots and slow-burn narratives. My thanks to the author, Jane Bettany, publisher HQ Digital (an imprint of Harper Collins Publishers UK) and NetGalley for the opportunity to read and review this title.

A Preview for this title is currently not available.
More Books By Jane Bettany
View All