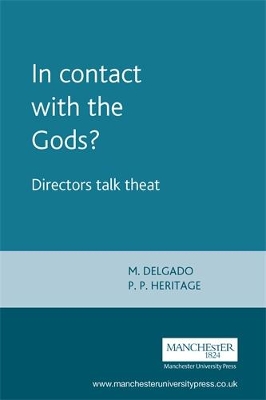 Description - In Contact with the Gods? by Maria M. Delgado

In 1994 the Arts Council of Great Britain brought together a number of theatre directors as part of the City of Drama celebrations. This is a collection of interviews and discussions with directors who have helped shape the development of theatre in the last 20 years. They include Peter Brook, Peter Stein, Augusto Boal, Jorge Lavelli, Lluis Pasqual, Lev Dodin, Maria Irene Fornes, Jonathan Miller, Jatinder Verma, Peter Sellars, Declan Donnellan, Ariane Mnouchkine, Ion Caramitru, Yukio Ninagawa and Robert Wilson. In addition to the art and craft of directing, there are discussions on multiculturalism; the "classical" repertoire; theatre companies and institutions; working in a foreign language; opera; Shakespeare; new technologies; the art of acting; design; international festivals; politics and aesthetics; the audience; and theatre and society. Finally, there is an epilogue by Peter Brook, Jonathan Miller and Oliver Sacks. -- .

Book Reviews - In Contact with the Gods? by Maria M. Delgado

» Have you read this book? We'd like to know what you think about it - write a review about In Contact with the Gods? book by Maria M. Delgado and you'll earn 50c in Boomerang Bucks loyalty dollars (you must be a Boomerang Books Account Holder - it's free to sign up and there are great benefits!)

A Preview for this title is currently not available.
More Books By Maria M. Delgado
View All

Contemporary European Theatre Directors
No Stock on Hand, Supplier Has No Due Date for Supply.
$226.80 $252.00

Contemporary European Playwrights
No Stock on Hand, Supplier Has No Due Date for Supply.
$189.00 $210.00