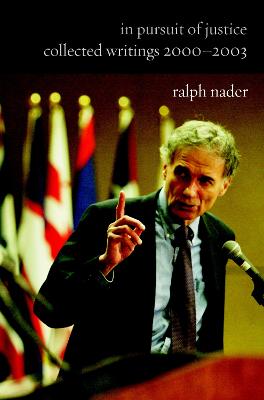 In Pursuit Of Justice

Description - In Pursuit Of Justice by Ralph Nader

Over the last forty years Ralph Nader has established himself as America's most active visionary. In this insightful new collection of his nationally syndicated column, Nader is at his best. Collecting more than one hundred articles spanning three decades, In Pursuit of Justice addresses corporate abuse, the latent dangers of nuclear energy, water and air pollution, consumer safety and more, all with Nader's inimitable sense of both his subjects' gravity and the people's entitlement to a fair lot.

Other Editions - In Pursuit Of Justice by Ralph Nader 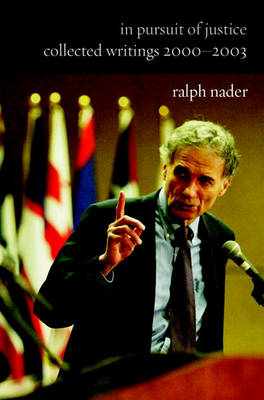 Book Reviews - In Pursuit Of Justice by Ralph Nader

» Have you read this book? We'd like to know what you think about it - write a review about In Pursuit Of Justice book by Ralph Nader and you'll earn 50c in Boomerang Bucks loyalty dollars (you must be a Boomerang Books Account Holder - it's free to sign up and there are great benefits!)

Born in Connecticut in 1934, RALPH NADER has spent his lifetime challenging corporations and government agencies to be more accountable to the public. His 1965 book "Unsafe at Any Speed" permanently altered the course of a reckless U.S. automobile industry and made Nader a household name. His lobbying and writing on the food industry helped to ensure that the food we buy is required to pass strict guidelines before reaching the consumer. One of Nader's greatest achievements was his successful lobbying for a 1974 amendment to the Freedom of Information Act, which gave increased public access to government documents. Over the years he has co-founded the public interest groups Public Citizen, Critical Mass, Commercial Alert, and the Center for the Study of Responsive Law. His 2000 presidential campaign on the Green Party ticket served to broaden the scope of debate on the nation's priorities. Named by the" Atlantic" as one of the hundred most influential figures in American history, Nader continues to be a relentless advocate for grassroots activism and democratic change. He lives in Washington, D.C.

A Preview for this title is currently not available.
More Books By Ralph Nader
View All

The Ralph Nader And Family Cookbook: Classic Recipes from Lebanon and Beyond
$54.99 $61.10