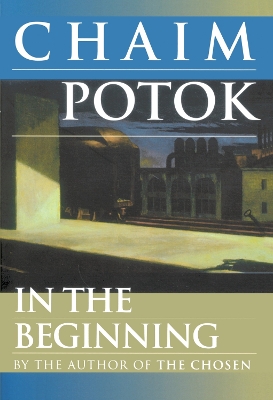 Description - In the Beginning by Chaim Potok

David Lurie learns that all beginnings are hard. He must fight for his place against the bullies in his Depression-shadowed Bronx neighborhood and his own frail health. As a young man, he must start anew and define his own path of personal belief that diverges sharply with his devout father and everything he has been taught....

Other Editions - In the Beginning by Chaim Potok Book Reviews - In the Beginning by Chaim Potok

» Have you read this book? We'd like to know what you think about it - write a review about In the Beginning book by Chaim Potok and you'll earn 50c in Boomerang Bucks loyalty dollars (you must be a Boomerang Books Account Holder - it's free to sign up and there are great benefits!)

Chaim Potok was born in New York City in 1929. He graduated from Yeshiva University and the Jewish Theological Seminary of America, was ordained as a rabbi, and earned his PhD in philosophy from the University of Pennsylvania. He also served as editor of the Jewish Publication Society of America. Potok's first novel, The Chosen, published in 1967, received the Edward Lewis Wallant Memorial Book Award and was nominated for the National Book Award. He is author of eight novels, including In the Beginning and My Name Is Asher Lev, and Wanderings, a history of the Jews. He died in 2002.

A Preview for this title is currently not available.
More Books By Chaim Potok
View All