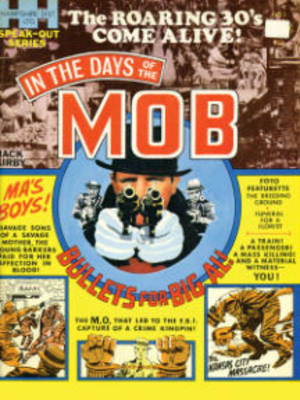 In the Days of the Mob HC

Description - In the Days of the Mob HC by Jack Kirby

After leaving Marvel Comics at the end of the 1960s, Jack Kirby came to DC, where he soon created the series of super-hero comics known collectively as "The Fourth World." One of his first projects for DC was the black and white magazine IN THE DAYS OF THE MOB, which featured on stories of organized crime in the 1930s in the style of the TV series "The Untouchables" and "The Godfather" movies.

Buy In the Days of the Mob HC by Jack Kirby from Australia's Online Independent Bookstore, Boomerang Books.

» Have you read this book? We'd like to know what you think about it - write a review about In the Days of the Mob HC book by Jack Kirby and you'll earn 50c in Boomerang Bucks loyalty dollars (you must be a Boomerang Books Account Holder - it's free to sign up and there are great benefits!)

Jack "King" Kirby's comics career began in 1937 and continued for nearly six decades. After his fruitful collaboration with Joe Simon ended in the late 1950s, Kirby joined Marvel Comics, where the first issue of Fantastic Four cemented his reputation as comics' preeminent creator. A slew of famous titles followed that elevated Kirby to legendary status, including Incredible Hulk, Avengers and X-Men. Kirby returned to DC in 1971 with his classic "Fourth World Trilogy," which was followed by THE DEMON, KAMANDI and OMAC. Kirby continued working and innovating in comics until his death in 1994.