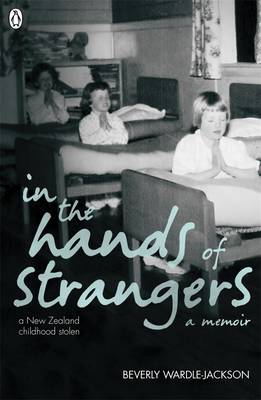 In The Hands Of Strangers

Description - In The Hands Of Strangers by Beverly Wardle-Jackson

An incredible true story of a state ward's harrowing childhood in 1960s New Zealand. 'We were children caught up in a welfare system that was meant to protect us, but ultimately served only to damage us. Yes, it was a different time, but many of the things that happened to us wouldn't be acceptable in any era. My name is Beverly Wardle-Jackson, and this is my story.' In the Hands of Strangers is the heart-wrenching story of Beverly Wardle-Jackson's stolen childhood. Separated from her brothers and sisters and taken into Child Welfare care at the age of 12, Beverly spends five harrowing years as a New Zealand state ward i being beaten, locked up, and eventually admitted to Porirua Hospital in Wellington for psychiatric treatment. Her trust is betrayed time and again, while she dreams of the day she will finally be reunited with her siblings. But will that day ever come? It's impossible not be moved by young Beverly's bravery and resilience as she withstands the harsh treatment meted out to her. Her story is one of courage, hope and a truly unbreakable spirit.

Buy In The Hands Of Strangers by Beverly Wardle-Jackson from Australia's Online Independent Bookstore, Boomerang Books.

Book Reviews - In The Hands Of Strangers by Beverly Wardle-Jackson

» Have you read this book? We'd like to know what you think about it - write a review about In The Hands Of Strangers book by Beverly Wardle-Jackson and you'll earn 50c in Boomerang Bucks loyalty dollars (you must be a Boomerang Books Account Holder - it's free to sign up and there are great benefits!)

Beverly Wardle-Jackson was first removed from her family and taken into Child Welfare care in 1952 at the age of eight. Four years later she was permanently separated from her brothers and sisters and made a state ward. She spent the next five years being beaten and locked up in state-run children's homes, before she was eventually admitted to Porirua Hospital for so-called psychiatric treatment. She did not regain her freedom until she was 17, at which point she was pregnant. Now a grandmother in her sixties, Beverly has bravely decided to share the story of her lost childhood.