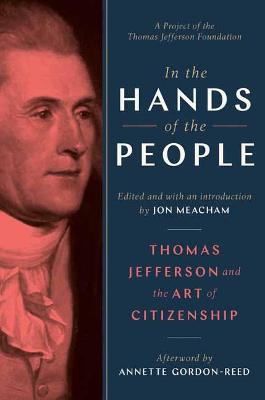 In the Hands of the People

Description - In the Hands of the People by Jon Meacham

Thomas Jefferson believed in the covenant between a government and its citizens--in both the government's responsibilities to its people and the people's responsibility to the republic. In this illuminating book, a project of the Thomas Jefferson Foundation, the #1 New York Times bestselling author Jon Meacham presents selections from Jefferson's writing on the subject, with comments on Jefferson's ideas from others, including Colin Powell, Madeline Albright, Frederick Douglas, Carl Sagan, American Presidents, others.

Meacham writes of how Jefferson's words provide an enrichment for U.S. citizens in the twenty-first century. His thoughts revitalize the way readers relate to Jeffersonian concepts including
Freedom- "Divided we stand, united we fall."
The importance of a free press-"Were it left to me to decide whether we should have a government without newspapers, or newspapers without a government, I should not hesitate a moment to prefer the latter."
Public education- "Enlighten the public generally, and tyranny and oppressions of body & mind will vanish like evil spirits at the dawn of day."
Participation in government- A citizen should be "a participator in the government of affairs not merely at an election, one day in the year, but every day."

There are also sections on immigration, voting, equality, patriotism, partisanship, and with introductions to each subject by Meacham. This book will be enlightening for all citizens of the American republic.

Buy In the Hands of the People by Jon Meacham from Australia's Online Independent Bookstore, Boomerang Books.

Book Reviews - In the Hands of the People by Jon Meacham

» Have you read this book? We'd like to know what you think about it - write a review about In the Hands of the People book by Jon Meacham and you'll earn 50c in Boomerang Bucks loyalty dollars (you must be a Boomerang Books Account Holder - it's free to sign up and there are great benefits!)


A Preview for this title is currently not available.
More Books By Jon Meacham
View All