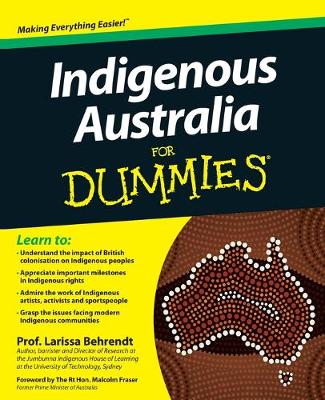 A comprehensive, relevant, and accessible look at all aspects of
Indigenous Australian history and culture
What is The Dreaming? How many different Indigenous tribes and
languages once existed in Australia? What is the purpose of a
corroboree? What effect do the events of the past have on
Indigenous peoples today? Indigenous Australia For Dummies
answers these questions and countless others about the oldest race
on Earth. It explores Indigenous life in Australia before 1770, the
impact of white settlement, the ongoing struggle by Aboriginal and
Torres Strait Islander peoples to secure their human rights and
equal treatment under the law, and much more.
Celebrating the contributions of Indigenous people to
contemporary Australian culture, the book explores Indigenous art,
music, dance, literature, film, sport, and spirituality. It
discusses the concept of modern Indigenous identity and examines
the ongoing challenges facing Indigenous communities today, from
health and housing to employment and education, land rights, and
self-determination.

Profiles celebrated people and organisations in a variety of
fields, from Cathy Freeman to Albert Namatjira to the Bangarra
Dance Theatre and the National Aboriginal Radio Service

Challenges common stereotypes about Indigenous people and
discusses current debates, such as a land rights and inequalities
in health and education

This book will enlighten readers of all backgrounds about the
history, struggles and triumphs of the diverse, proud, and
fascinating peoples that make up Australia's Indigenous
communities. With a foreword by former PM Malcolm Fraser,
Indigenous Australia For Dummies is a must-read account of
Australia's first people.
'Indigenous Australia For Dummies is an important
contribution to the broad debate and to a better understanding of
our past history. Hopefully it will influence future
events.'?Former Prime Minister Malcolm Fraser

» Have you read this book? We'd like to know what you think about it - write a review about Indigenous Australia for Dummies book by Larissa Behrendt and you'll earn 50c in Boomerang Bucks loyalty dollars (you must be a Boomerang Books Account Holder - it's free to sign up and there are great benefits!)

Professor Larissa Behrendt is a Eualeyai and Kamillaroi woman. She is Professor of Law and Director of Research at the Jumbunna Indigenous House of Learning at the University of Technology, Sydney, and the author of several novels and books about Indigenous issues. She was named as 2009 NAIDOC Person of the Year and 2011 New South Wales Australian of the Year.

A Preview for this title is currently not available.
More Books By Larissa Behrendt
View All