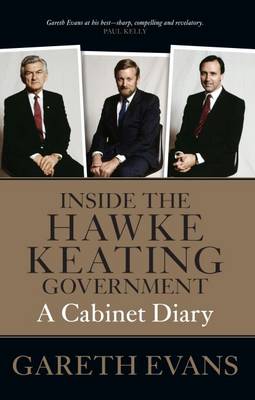 Description - Inside the HawkeKeating Government by Gareth Evans

As good as it gets in Australian politics. That's how the Hawke-Keating Government is now widely regarded. But how did this highly able, ambitious, strong-willed group work through its crises and rivalries, and achieve what it did?
Gareth Evans's diary, written in the mid-1980s and published now for the first time, is the consummate insider's account. It not only adds much new material to the historical record, but is perceptive, sharp and unvarnished in its judgments, lucidly written, and often highly entertaining.

Book Reviews - Inside the HawkeKeating Government by Gareth Evans

» Have you read this book? We'd like to know what you think about it - write a review about Inside the HawkeKeating Government book by Gareth Evans and you'll earn 50c in Boomerang Bucks loyalty dollars (you must be a Boomerang Books Account Holder - it's free to sign up and there are great benefits!)

A Preview for this title is currently not available.
More Books By Gareth Evans
View All

How to Play Bass: For the Bassist Looking to Progress Their Skills and Knowledge
$37.45 $41.61

Strumming the Guitar: Guitar Strumming for Beginners and Upward with Audio and Video
$28.63 $31.81

Learn to Play Guitar: A Comprehensive Guide for Beginners to Intermediate Players
$30.83 $34.26