Inside The Third Reich

Description - Inside The Third Reich by Albert Speer

'Inside the Third Reich' is not only the most significant personal German account to come out of the war but the most revealing document on the Hitler phenomenon yet written. It takes the reader inside Nazi Germany on four different levels: Hitler's inner circle, National Socialism as a whole, the area of wartime production and the inner struggle of Albert Speer. The author does not try to make excuses, even by implication, and is unrelenting toward himself and his associates...Speer's full-length portrait of Hitler has unnerving reality. The Fuhrer emerges as neither an incompetent nor a carpet-gnawing madman but as an evil genius of warped conceits endowed with an ineffable personal magic.'- New York Times

Other Editions - Inside The Third Reich by Albert Speer 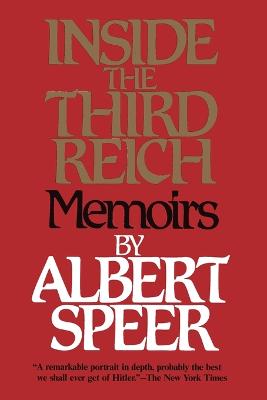 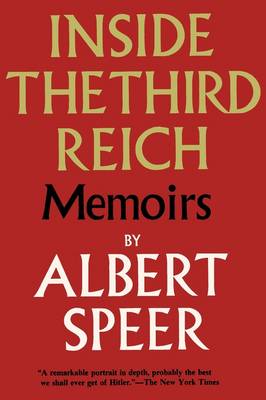 Book Reviews - Inside The Third Reich by Albert Speer

» Have you read this book? We'd like to know what you think about it - write a review about Inside The Third Reich book by Albert Speer and you'll earn 50c in Boomerang Bucks loyalty dollars (you must be a Boomerang Books Account Holder - it's free to sign up and there are great benefits!)

Albert Speer was unique in the Third Reich. An intellectual architect, he was befriended by Hitler in 1933 and for the next 12 years they maintained one of the most powerful and extraordinary relationships in the Nazi hierarchy. In 1942 Speer was appointed Armaments Minister and became second only to Hitler himself as a power on the home front. But in 1945, Speer defied Hitler's scorched earth policy and began to plan his assassination. At Nuremberg he was sentenced to 20 years in prison.