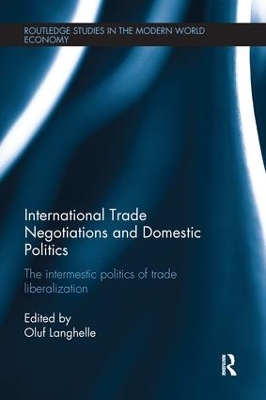 The Intermestic Politics of Trade Liberalization

In spite of many years of negotiation on trade liberalization, progress seems to have stalled. This book explores why resistance to further market liberalization seems so strong, given that the benefits are seen to outweigh the costs.

This volume argues that in order to understand the slow progress of World Trade Organization negotiations, we need to take into consideration the 'intermestic' character of trade politics, that is, the way in which international and domestic aspects of politics and policies have been woven together and become inextricably related to each other. This is a general trend in our globalizing world, and one that is most pronounced in the case of trade politics and policy.

International Trade Negotiations and Domestic Politics therefore presents an in-depth analysis of institutions, ideas, interests and actors in the interplay between international trade negotiations and national negotiating positions. At the international level the authors focus on the multilateral negotiations within the World Trade Organization, together with the plurilateral and bilateral negotiations on free trade agreements. At the regional and domestic level they analyze the trade politics and policies of two established powers, the European Union and the USA; two rising powers, China and India; and a small industrialized country with an open economy, Norway. » Have you read this book? We'd like to know what you think about it - write a review about International Trade Negotiations and Domestic Politics book by Oluf Langhelle and you'll earn 50c in Boomerang Bucks loyalty dollars (you must be a Boomerang Books Account Holder - it's free to sign up and there are great benefits!)

Oluf Langhelle is Professor of Political Science at the University of Stavanger, Norway.

A Preview for this title is currently not available.
More Books By Oluf Langhelle
View All