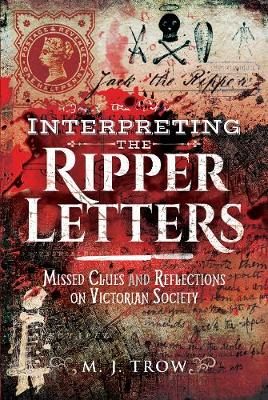 In the autumn of 1888, a series of grisly murders took place in Whitechapel in London's East End, the Abyss, the Ghetto, the City of Eternal Night. The Whitechapel murderer, arguably the first of his kind, was never caught but the killings gave rise to the best known pen-name in criminal history - Jack the Ripper. The Whitechapel killer was terrifyingly real but Jack was the creation of Fleet Street, the gallows humour of a newspaper hack whose sole aim in life was to sell newspapers. And where the Dear Boss' letter, with its trade name' signature led, thousands followed. This book is not about the world's first serial killer but about the sick, the perverted, the twisted souls who put pen to paper purporting to be the killer or suggested ever more lurid ways in which he could be caught. Innocent men were put in the frame by Victorian trouble-makers who would be perfectly at home with today's Internet trolls, pointing cruel fingers in almost perfect anonymity. The book takes the lid off Victorian mindsets, exposing a dark and unnatural place as topsy-turvy as that inhabited by the killer himself. AUTHOR: M.J. Trow is a crime historian who has written several books on Jack the Ripper and the murders of his time. One of them, Quest for a Killer featured as a documentary for the Discovery Channel in 2009. He has conducted his own Ripper walks in Whitechapel and is a regular lecturer at the annual Ripper conferences held each summer.

» Have you read this book? We'd like to know what you think about it - write a review about Interpreting the Ripper Letters: Missed Clues and Reflections on Victorian Society book by Trow, M J and you'll earn 50c in Boomerang Bucks loyalty dollars (you must be a Boomerang Books Account Holder - it's free to sign up and there are great benefits!)


A Preview for this title is currently not available.
More Books By Trow, M J
View All